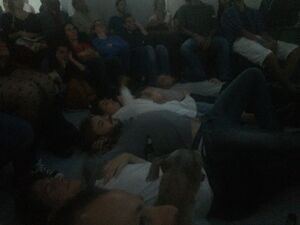 This is a terribly rare screening... but if you are at all interested in alternative culture, or the work of William Burroughs (especially his more experimental and political adventures) then this is no-budget cyberpunk flick is absolutely essential. Made in Germany in the 80s, at a time when Berlin was still a "divided heaven", with the famous wall still splitting the city in two, this film is a real relic which captures the spirit of a very special time and place. Since it was made, this film has gone on to become a legendary submerged cult flick.

The story (roughly) is this: Musician F.M. Einheit (member of the band Einsturtzende Neubauten) discovers that different sonic frequencies induce specific behavior-patterns in listeners. To put it in a nutshell, he notices that Muzak is played in restaurants in order to wipe away people's emotions, so that they will become passive consumers.

Einheit, after having some bouts with his girlfriend (played by real-life former child prostitute Christianne F.) and dream sequences (featuring William S. Burroughs) finds himself amongst underground rebels led by Genesis P. Orridge (Psychic TV, Throbbing Gristle) who explains to F.M. about how the government is 'controlling' the public through muzak and monoculture. Einheit then steals the tape from his local Burger joint and remixes it so that it induces panic. At one point, when the new tape is inserted into the restaurant, riots start to break out (this is actually documentary footage of the riots which occurred when President Reagan visited Berlin). After seeing this film you probably will not enter a chain-store hamburger restaurant again, which is one reason people should watch the film!

Like I said this is an extremely low-budget film, but with an incredible cast and a wonderful soundtrack, coming to you right from the heart of post-punk Berlin. The makers came up with a very tense, well edited and very rhythmic film. Its not the kind of film with an intense plot...its more about ideas... a movie that invites the viewer not only to watch, but also to feel the poetry of the film. A relic from a time lost... or maybe a new starting point for the future? Music for the soundtrack was composed by Soft Cell, Neubauten, Psychic TV and The The.

"Decoder is truer to the techno-anarchist strand of Burroughs’ fiction than anything attempted before or since, and it’s arguably truer to the spirit of his works as a whole than David Cronenberg’s Naked Lunch."