I co-founded Prototype Pittsburgh, a feminist makerspace, with my friend Louise in September 2016 with the mission of building gender and racial equity in technology and entrepreneurship. Since then, our makerspace has engaged over 3,000 feminists of all genders in our workshops and events, and incubated 15 emerging companies. When we started Prototype PGH, we were largely impacted by three things: the election of Trump, our own experiences working in a male dominated makerspace, and our evolving understanding of feminism. 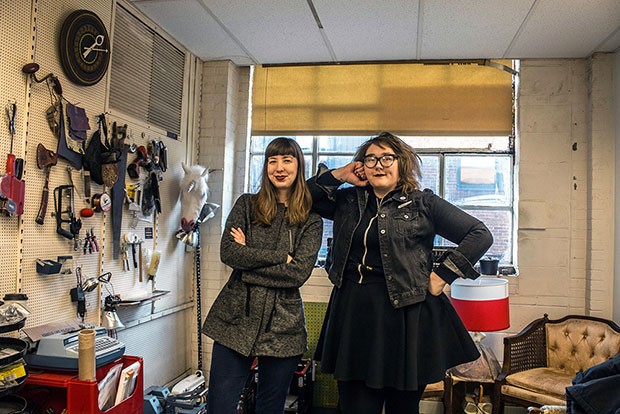 The night that Trump was elected, I was at a bar in the suburbs of Pittsburgh. Earlier that day, my friend Tyler and I had delivered a conference presentation on how to build gender and racial equity in communities through makerspace education. I was feeling very confident that Hillary Clinton would be elected. When the waitress came over to take our order, I shouted, “Aren’t you SO excited to have our first woman President?” The waitress rolled her eyes and spit out the words, “Yeah right. I voted for Trump.” She was a young white woman about my age at the time—28 years old—and I had wrongly assumed that we would be on the same page about the election. Who in their right mind would vote for this guy? As I stepped outside the bar I noticed for the first time the Trump bumper stickers on the cars in the parking lot and all of the lawn signs stuck in the grass. My stomach sank. I was deep in Trump territory and hadn’t even realized it.

Later that night I called my mom. “Mom, please tell me you didn’t vote today.” Each time a presidential election came around, my mom oscillated between apathy and not voting, to anger and voting Republican. There was silence on the other end of the phone. “Mom, did you vote for Trump?” After a long pause she blurted out, “Erin, you have to understand! He’s going to fix our crumbling bridges and pave our roads! Erin, he’s a millionaire! He knows how to do these things!” I felt numb and hung up the phone.

In the weeks that followed the election of Trump, I felt a slow burning anger that I had never felt before. It was the type of anger that starts from a place of guilt and blame—knowing that the largest demographic that voted for Trump was also a demographic that I am part of. White middle income womxn. Pennsylvania went red in the 2016 election for the first time that I could remember. The blue, liberal map that was the city of Pittsburgh didn’t extend beyond city boundaries. It looked like the entirety of rural Pennsylvania was full of confederate flag waving Trump lovers. And my family was part of that.

When Trump was elected, I was working for a makerspace that had started in California and opened an additional eight locations nationwide plus three international locations. It was the first chain of makerspaces in the world and its mission was to democratize access to the tools of innovation. It worked like a gym membership: If someone wanted to learn how to weld, wood work, laser cut, or a whole bunch of other high tech and low tech ways of making, they could come and take a class for two hours and purchase a monthly membership which would give them 24/7 access to the space and equipment. No matter their skill level, everyone had to take and successfully pass a safety and basic use class on the equipment they wanted to use. I was a part-time teacher in their afterschool program and although I didn’t have a background in technology or engineering, I was learning on the fly. In the first three months of my makerspace membership, I must have taken the equivalent of $5,000 worth of classes—all for free because I was a newly hired instructor. In those first three months, I learned how to solder circuits, CNC laser cut, design vector files for the laser cutter in Adobe Illustrator, basic 3D modelling, 3D printing, spot welding, basic sheet metal manipulation, CNC vinyl cutting, and screen printing. Learning how to use the equipment, software, and tools in this makerspace was one of the most confidence building, empowering experiences I’ve ever had. And I was able to do it because my partner Erik stayed home with our son for three days a week while a federally funded subsidy program for low income families provided daycare the other two days. At the same time that I was training hundreds of teens in the use of high tech equipment and software in our after school programs, I was also building a sexual harassment case against our manager. He had made comments about the female employees he thought were beautiful, at one point telling me to give one of the youth instructors extra hours because, “If only I was twenty years younger. Give her whatever she wants.” He had also told one of our corporate partnership managers to stop giving tours to groups of male executives because “They wouldn’t take her seriously as a young woman.” At a womxn in Tech event that I hosted at the makerspace in partnership with the Mayor’s Office which featured a panel discussion with top womxn in tech, our manager said, “Let’s make sure this discussion doesn’t come across as an exclusive event that men aren’t allowed to attend.” I explained to him that to address the lack of womxn in our makerspace, we needed to create a supportive space that centered their experiences and expertise. But he couldn’t see it that way.

The first person I heard say the word “feminist” was my high school history teacher. She taught us to always ask, “Where are the womxn?” throughout history as we are learning about world affairs through the eyes of white men, which is the lens through which most U.S. schools educate our youth. When Trump was officially brought into office in January 2017, a Pittsburgh foundation called Sprout Fund opened a call for submissions for “The 100 Days Grant.” The idea was that just as Trump would be setting the agenda for the White House in the first 100 days of his administration, so too should residents of Pittsburgh. There were dozens of categories, from which community members could apply for funding, including womxn's rights, racial justice, LGBTQ rights, and disability advocacy. A few days after the call for submissions opened, Louise and I began promoting the idea of a feminist makerspace where anyone could come together to try new things, fail quickly, and find the support to start all over again. We decided to call the space “Prototype PGH” and we quickly secured a physical location for it in a former metal working facility in the Oakland neighborhood of Pittsburgh. A friend of ours had purchased the building, which had sat empty for decades, and a community of artists, activists, and musicians renovated it into a shared workspace called Bloomcraft. Our space was a small office—a 20 foot by 10 foot room—with buzzing fluorescent lights, original pegboard walls, and drop ceilings. We paid $200/month in rent which we split out of pocket.

Shortly afterward, we won the $5,000 Sprout Fund grant. We held a grand opening on a particularly cold but sunny January weekend and counted nearly 400 people at the event. We were floored. Not only did we have a space and funding, we had the most important thing of all: community support. We realized we had struck a chord with many people and that our idea of a feminist makerspace resonated with a community larger than ourselves. We realized we had a lot of work to do if we were going to live up to the high expectations we had set. We spent the next 100 days engaging over 500 womxn and feminists of all genders in free, hands-on workshops on tech, entrepreneurship, and manufacturing, and providing free childcare during all workshops. We used the grant to pay instructors and childcare providers $100 for each two hour workshop, with topics ranging from salary negotiation to 3D printing and electronics soldering to CNC laser cutting. In the first few days of our workshops we received over 100 donations from new members. We also received equipment donations from friends and supporters including a CNC milling machine, laser engraver, 3D printer, vinyl cutter, hand tools, loom, woodworking equipment, and screens for printing.

When we started Prototype PGH we had one guiding principle: treat womxn as experts. We were tired of having things explained to us that we already knew and we were tired of not being able to ask for help if we didn’t know how to do something because doing so would either result in 1) having the thing done for us or 2) having the thing explained to us in a patronizing way. It was important to us that we develop a community where womxn of all skill levels, backgrounds, and experiences could come together and share what we know, be valued as the experts we are, and feel supported in our vulnerability. I had gone my entire life not knowing how to use a power drill because I had never felt comfortable enough asking how to use one. I had previously worked in a makerspace where I could use high tech CNC equipment like laser cutters, vinyl cutters, and 3D printers but I couldn’t admit that I didn’t know how to use something as simple as a drill. We also wanted to create a space where the presence of children was not just tolerated but actively embraced. As we enter our fourth year, we’ve continued to make it a priority to provide free childcare at all of our workshops and remove the barrier for parents, particularly mothers, to access our space and learn new skills. We’ve also moved into a larger space in the Bloomcraft building and have increased member access to 24/7. In 2020 and beyond, we continue to prototype the kind of world we want to live in, while centering the experiences of womxn and marginalized communities.