The closing event of our exhibition Inefficient Tools for Quantified Beings Exhibition and Public Program at FUSE took place on live.hackersanddesigners.nl with a guided tour of the show by Anja Groten and a take over of the platform by performance artists Astrit Ismaili and Angelo Custódio in collaboration with Tatiana Rosa. The livestream was hosted by Juliette and operated by Selby! 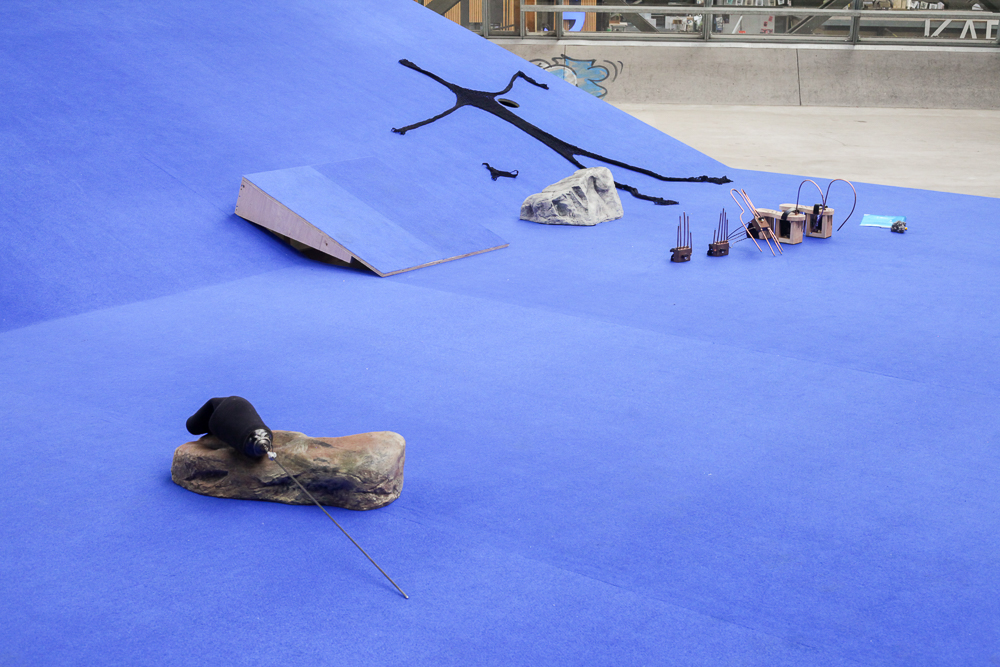 A guided tour of the show with Anja

Body extensions and wearable instruments are a recurring motif in Astrits work, spanning from the first body extension work in 2012, Kullani, to the latest works; Pink Muscle, The New Body and MISS. Often the finalized instruments become part of a larger performance work, but these objects also stand alone as independent works. Hence they are part of their ongoing research on body extensions and wearable instruments. Astrit interested in adding new qualities to the human body, often by designing wearable music instruments that produce electronic sound. The use of these instruments introduces the notions of cyborg politics and biopolitics into the work, questioning distinctions such as those between natural and artificial, mind and body, self-developing and externally designed. The extensions create bodily proposals outside conventional norms, commenting on the mechanisms that manage human life processes and authorities over knowledge, power, and subjectification. 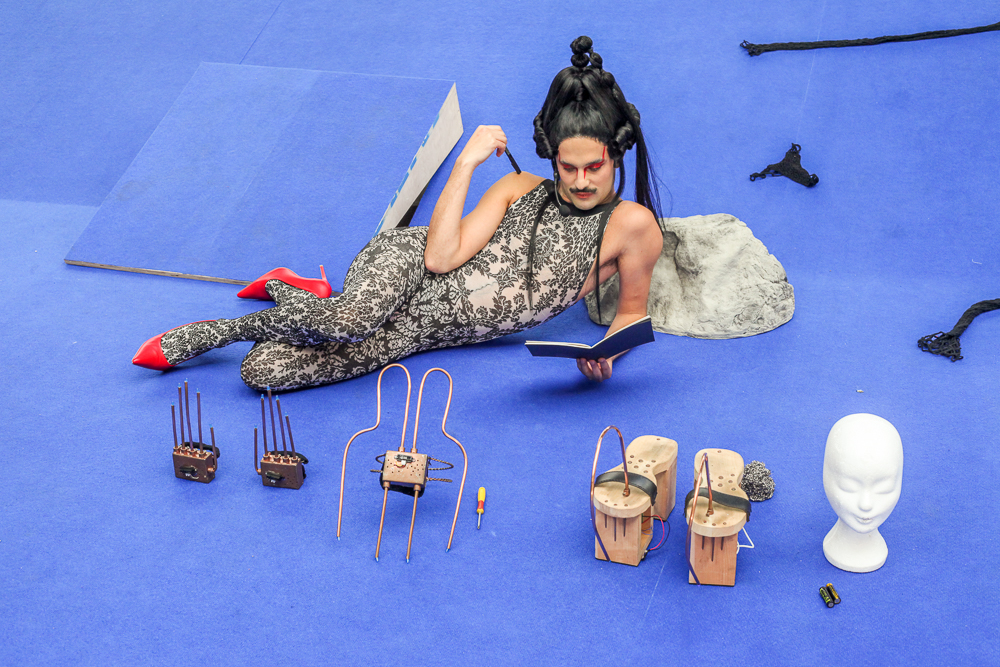 Astrit Ismaili (born in Prishtina/Kosovo) is a performance artist based in Amsterdam/The Netherlands. Astrit Ismaili is interested in transcending the personal into an extraordinary experience which is delivered through transforming the body by adding new qualities to it, without losing its political urgency. Creating alter-egos, body extensions, wearable music instruments and experiential spaces they treat reality as a playground where norms are transformed or questioned. The artist graduated from the MA-Program at DasArts – Master of Theater in Amsterdam. Ismaili is a recipient of the Young Visual Artist Award 2011 and was a resident at ISCP in New York City. Further they won the Award for Best Director at the Skena Up International Student Festival 2011, received the Forum ZDF followup Grant 2013 and won the Awards for Best Video Performance and Best Styling Video at Video Fest 2014. They co-curated a performance event ‘Prishtine- mon amour’ in 2012 in Pristina and they are currently working as an editor for Lost & Found, Amsterdam. They have showed work at ISCP, New York, S.A.L.T.S., Basel, KW Institute for Contemporary Art, Berlin, Stedelijk Museum, Amsterdam, Kunstverein, Amsterdam, Salzburger Kunstverein, Salzburg, Robert Grunenberg, Berlin, Juliette Jongma, Amsterdam, Frascati Theater, Amsterdam, Corzo Theater, Den Hague, Spielart Festival, Munich, Kaserne Theater, Basel etc.

Subjectivities undergo processes of in/stability with the norm body, the norm movement, the norm behaviour, the norm morals (…). A process continuously reinforced by the surveillance of the gaze. Committing to the vulnerability of this inner conflict in resonance with crip/queer alternative corporealities, potentially engages productive processes of decolonisation of desire towards decomposing the heteronormative and hegemonic narratives.

QueerAble in/stabilities is a performative encounter, developed in collaboration with Tatiana Rosa, in which other embodiments are transformed into sound through a wireless electro-acoustic interface assembled to the body. Resonance becomes agency when the movement of a marginalised embodiment is translated into sound. Through amplification of a metal acoustic resonator, and it’s live electronic manipulation, the work engages continuous flows of resonance. Biometric data gives the interface another dimension by altering the produced sound in relation to the proximity of other bodies. The uttered composition of several sonic textural layers, results from the dialogic relation between embodiment, space, voice and other bodies.

Tatiana Rosa is the responsible for the live electronic manipulation of sound, Michele Abolaffio for the technical support and development of the interface and Arthur Guilleminot for the its design development and wearables.

This project is currently supported by Mondriaan Funds.

Angelo Custódio (1983, PT/NL) is a research based artist currently living in Amsterdam. He has been developing an engaged practice informed by critical theory and embodied knowledge(s). For years trained as a classical singer, Angelo explores the performative use of the voice and perverts embodied singing techniques to develop sonic encounters with the vulnerable. These performative encounters facilitate open cracks - wild(er) spaces - that utterly welcome other embodiments and freer ecologies of living.

He urges to nourish empathic understandings of identities, with a focus on the contemporary failure of support structures towards queer bodies and bodies with disability. Angelo holds a MFA from Master of Voice (MoV), Sandberg Institute and a Ba in Classical Singing from the Conservatorium van Amsterdam (CvA).

Tatiana Rosa (1991) is a Portuguese audiovisual artist currently based in Amsterdam. Tatiana dedicates herself to developing multidisciplinary performances where she assumes the role of flutist, sound designer and visual artist. In her own creations, she is dedicated developing works in which the musicians take part in theatrical expression through use of movement, voice and electronic extensions. She’s a founding member of Trash Panda Collective, Queens of Noise and Ensemble mpmp.

More photos from the event: