On and Off the Grid Contribution by m—d—buero

We understand design not only as material and visual outcomes, but as scripts, conditions, methods, and processes in which the materiality or visuality is imbued. Therefore, questioning the role of technology where certain orders and mechanisms are inscribed are important. We found Sarah Garcin's design approach interesting because she encouraged designers, artists, and programmers to design their own tools.

Unfortunately, we missed Garcin’s Publishing Machines Workshop but we were able to see her project PJ Machine, a life publishing box, at the H&D Summer Academy's final exhibition. Garcin makes critical standpoints in design processes by designing and modifying her own tools. By doing so, she furthers her own design capabilities and questions and learns about the nature and strengths of design tools. Furthermore, Garcin’s project is open source. The open source movement provides the opportunity for distributed, shared, and diverse approaches to design. The open source movement let's design be a critique to conditions that are influenced by and dependent on the current monopoly of design tools.

Retracing Garcin's approach in our understanding of technology, we believe that the conditions that design projects are based on are already filled with a certain kind of knowledge and presets. These presets influence how we design and how design, economics, and living environments are connected. In this sense, the practice of design consists of not only making a design, such as products, services, questions, knowledge, narration etc., but also about *designing* designing. That means, designing the conditions and technology we used to produce our design.

It is always a challenge to find the right balance between self-initiated and commissioned, paid, and unpaid projects in our practice. As well, finding the time and space for critical reflection. Our goal with taking part in the H&D Summer Academy was to come up with a small collaborative project. We were aware that the structure of the H&D Summer Academy would not leave a lot of time to develop a project in addition to the workshops and assignments. We were lucky to meet two other participants, Lucia Kolesarova, a designer from Prague, and Dorian de Rijk, an artist from Amsterdam, who were energized and motivated in the same way, though. We received great support from Dennis de Bel, a coder from Rotterdam and the workshop leader of Edible Computing. Together, the five of us founded the Research Institute for Botanical Linguistics (RIBL). Its basic goal is to gain knowledge and a better understanding from botanical living systems through hacking activities. The Institute's concern is to investigate to what extent plants communicate with each other. How do they shape and maintain their own communities and collaborative activities? What conclusions can we draw from these botanical investigations for our human coexistence?

During the H&D Summer Academy, our project became an ironic performative installation with a serious research vision. We tried to hack a tomato plant by receiving signals via sound waves. We connected that data via a Python program with bitmap pictures in order to visualize the plant's response. We organized a photoshoot where we documented our hacking activities, published a RIBL webpage [1], and designed our RIBL uniforms for our exhibition appearance (see pictures below).

This state of making and performing was both a moment of learning through hand-ons methods and for sharing a statement. We were simultaneously inhabiting the role of Institute researchers and founders, collectively negotiating our identity, and experiencing the limits of staging the hacking analysis of the botanical landscape.

Furthermore, the production was dependent on a limited timeframe. Basically, there was only a small amount of time to organize the distribution of tasks, to make decisions, and to question what we were actually doing. This is not always an advantage, but in this situation it forced us to make more and analyze less. The time pressure helped us to found RIBL. By simply claiming to be an Institute, the momentary performative installation became real. In this spirit, we continue with regular Institute meetings in order to further develop the project.

Working in a cross-disciplinary environment, such as the H&D Summer Academy and the Research Institute for Botanical Linguistics, can be seen as a critical mode of working. It is always about the negotiation of disciplinary differences. You push your own disciplinary borders by unlearning habits to make space for the other. We feel that this unlearning is what made the foundation of RIBL fruitful. Not only because of our different professional and cultural backgrounds, but by its goal of borrowing knowledge from botanical living systems and applying it to the collaborative mode of production of RIBL. 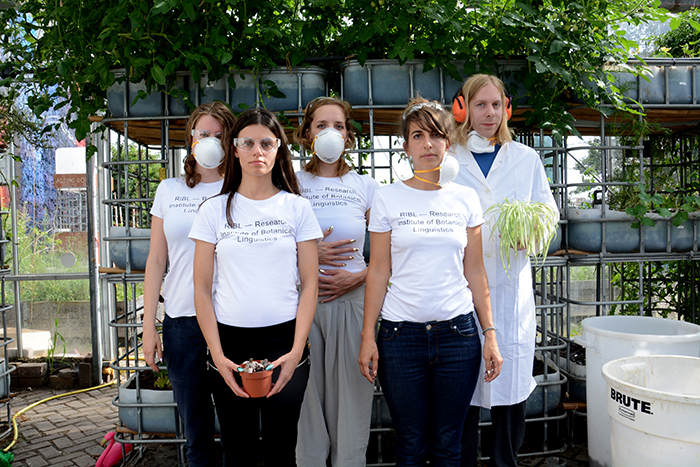 I would like to follow up on this thought of ethnographic learning by botanical landscapes and connect it briefly to my personal research. My research is concerned with the modalities and limitations of a critical design practice against the mechanisms of precarity in the creative and cultural industries.

The structure of contemporary cultural and creative industries in Western countries is comprised of numerous small businesses. These are an assemblage of project institutions that are characterized by volatile, project-based, and short-term activities. This leads to an increased exposure to unsafe working and living conditions.

Long-term and stabilized working conditions have lost priority in the context of neoliberal deregulation and forced flexibility. Austerity measures, cutbacks, and extremely low wages in the cultural and public services sectors wages are now common. As theorist Isabel Lorey claims in her book *State of Insecurity*, working conditions connected to these processes are characterized by uncertainty, self-enforced individualization, and the merging of work and leisure. [1]

For my research, I borrow the term Design Labour coined by Selçuk Balamir[2]. In his view, design practice consists of three elements: Design Labour, Design Artefact, and Design Knowledge. His theory focuses mainly on the product design discipline, but I believe his thoughts are relevant for each creative discipline.

With the term Design Labour, he describes a structural precondition in which the design practice is based. He shifts the focus of design objects to work processes and their value forms. With this perspective, it is possible to better understand the political economy and social dimension of design. In addition, it helps stretch the current critical design discourse with the labor of design, which is hardly considered.

Critical design methods demonstrate an emancipatory potential against precarious working conditions. At the same time, they show how the relationship between design and critique remain ambiguous. Design can be understood as critical by questioning the status quo and setting up new relationships between humans and non-humans with artefacts, knowledge, visualities, and structures. Designs still sustains normativity by stabilizing its appearances, though. Simultaneously, critical strategies get easily taken over by capitalist mechanism and neutralized, as we have already learned from ideologies and countercultural practices from the years around 1968. When looking for alternatives for designing Design Labour, the ambivalent situation of critique needs to be considered. Furthermore, critique understood as resisting and negating the status quo might run into danger of getting stuck in negativism. Therefore, the critical potential may remain limited and an affirmative form of critique is needed instead.

Appreciating the unstable status quo of working and combining it with imagination as a mode of critical practice is one part of my research. American anthropologist Anna Lowenhaupt Tsing represents this kind of approach by learning about Matsutake mushrooms to reopen our imaginations in her 2015 text The Mushroom at the End of the World: On the possibility of Life in Capitalist Ruins, State of Insecurity[3].

Matsutake mushrooms are based on a strong survival system and tend to appear at destroyed places, such as sites of human deforestation. Tsing claims that only by leaving the era of predicted process and growth, as propagated by the modernized world of the 20th century, and by accepting the unpredictable future forced by instability, might we be able to understand the diversity of life and temporalities on earth. With this realization, we may be able to act beyond capitalist mechanisms.

Looking to the Matsutake mushroom system inspires scenarios of coexistence and collaborative survival within unstable economic (e.g. Design Labour) and living conditions. In addition, learning from other-than-human-societies is an attempt to rethink human-led design approaches. In human-centered design, we involve only the human perspective. Yet, new relations to the natural world and hybrid forms of designing and thinking are calling these binary understandings between humans and non-humans into question. Human-centered approaches tend to result only in short-term band-aids for one species and profit-driven systems, rather than generative solutions for heterogenous living systems. I am dedicated to exploring the latter.