Making Contradictions: An Introduction to Dialectics and Bot Making by Jaroslav Toussaint

On giving a collaborative workshop with Vera van de Seyp, and two inspiring weeks at the Amsterdam Harbour.

We can’t talk about things being ‘fake’ without implicitly renegotiating what we believe to be ‘real’. Dialectical reasoning is a technique of thought used to make judgements about real world problems. While it can be practised theoretically, there is also a pragmatic approach to it.

By suggestion of the organizers of Hackers & Designers Summer Academy, I joined forces with Vera van de Seyp to make the workshop a more technical and practical experience. Which proved to be a great idea.

Over several weeks we discussed the topic, exchanged thoughts regularly, and came up with a hands-on exercise to accompany the theory. Looking back at the workshop and the discussions we had in the group, as well as the great ideas people came up with, I feel assured that the topic and the connection between theory and hands-on technical development will contribute to the already exciting framework of the Hackers & Designers Summer Academy.

How to distinguish between the fake and the real, between truth and untruth? How to gain knowledge? These fundamental questions triggered the invention of dialectics and logic as methods of reasoning. Dialectics are used to build coherent world views that can describe complex social, ever-changing phenomenons that cannot be reduced simply to either/or relations. Instead of trying to avoid and resolve contradictions dialectics describes reality as a system of intertwined antagonisms in a constant struggle for resolve.

In this sense dialectics is somewhat opposed to the field of programming which is deeply rooted in the mathematical logic, although both are equally valid and overlapping methods of judgement. In its contemporary application within social media, programming is applied to facilitate social evaluation processes of truth. We enter our preferred online platforms to become informed and to exchange our opinions. The social exchange that has transformed our political landscape so heavily in recent years—most prominent in the return of nationalistic fascism in more or less open forms on the political main stage—has largely shifted online. The medium that had promised to liberate the exchange of ideas and bring with it better forms of democracy has left most people stuck in their information bubble. Algorithms are preselecting content for us, and those we are exchanging thoughts with may often not be human at all. Are there still possibilities for change within a technology like, for example, online conversation bots? We will come back to that.

Dialectics can be used to do two basic things. It can be a tool for modelling an abstract understanding of reality and the developments that led to it, e.g. how the shift of social democratic parties in western countries in the nineties toward economic liberalism, individualism, spin politics and their ignorance to rising economic inequalities provided fertile ground for the far-right to plant their simplistic ideas for solutions into public discourse. Dialectics can also be a method for leading a fruitful discussion that aims to develop a shared understanding of a problem at hand. But there are some preconditions that need to be taken into account for this to work. Participants of this discourse need to be willing to hear, process, and accept arguments that contradict their own positions and agree that neither participant has the truth on their side. That in fact truth as a process in and of itself is constantly being renegotiated. In our current political climate this idea seems like a hopeful illusion, although it is the main precondition for any democracy to function. What makes the constant public lying of Donald Trump so dangerous is not so much its immediate affect—most of the time the lies are just plain invention, without any real world connection—but the cancellation of discourse, and any process of negotiated understanding in politics. The opposition cannot argue with a blatant and obvious lie. He signals to his followers that it is okay not to take the standpoint of the opposing side into consideration, and that politics is about claiming to be right based on whatever believe you have, and defending this position by all means. The moment Trump flourishes his apologist claims, e.g. that the Green New Deal introduced by Alexandria Ocasio-Cortez is about abolishing cars, aeroplanes and cows (which his conservative echo chamber consistently repeated), his followers understand that they have no obligation to read into how Ocasio-Cortez’ proposed plan could actually benefit them.

One might think that dialectics have little place within the far-right/alt-right movement that has been on the rise in so many countries over the past few years. But looking closely one can see how twisted versions of it are being applied very successfully. While wilfully overlooking the main contradictions within capitalist society—such as the increase of the concentrated ownership over means of production and financial power in the hands of few private agents, the division of people into nation states or the suppression of women as identified through the (more or less marxist) critical left—the right points to subsidiary contradictions like the influx of peoples seeking refuge from conflicts and economic crisis who are supposedly threatening the autochthonous citizens. It is easy to pin economic stagnation on such factors because stopping immigration will not affect the real power structures that create the decline of the middle class, unemployment, military conflicts etc. in the first place. Yet, the political right knows that contradictions are great starting points for powerful narratives, such as the tale of the lazy Southerner coming to the white and successful north to benefit from it’s achievement, or the culturally and morally inferior Muslim on a mission to conquer the west out of envy, and so on and so forth. These tales are more than just prejudice. They are meant to capture the imagination, and they do because they are formally based on contradictions. Another use of contradictions within right-wing movements is to ignore very obvious ones. Offering the return to some kind of social system from the past, e.g. the German Empire, colonial Britain or the USA during slavery, while at the same time promising that the achievements of contemporary digital age can be maintained and their development will continue as it is today is obviously nonsense. Yet this narrative proves successful because although many people are frightened about accelerated progress and sometimes wish to return to ’simpler times’, they would never give up their smartphone.

Given it’s abuse (described above) dialectic reasoning can also be used as a practical tool for critical thinking. It can help to sharpen ones analytical skills for ‘soft-science’ problems, to identify dialectical contradictions as such and to expose their dynamics. Dialectics—in combination with logic and other forms of reasoning—can help to build a personal, coherent worldview that not static but adoptable. This coherent worldview offers a measure of truth, especially in times when mediated facts are increasingly hard to individually validate. Such a tool is—as I learned during the summer academy—well put in the hands of hackers and designers, people who make concepts and tools for communication which subvert conventional modes of commercial exchange and put technical sovereignty back into everybody’s hands.

Most of us use dialectical thinking in our work already. And I could see the adoption of dialectical thinking within the other participants topics. For example in Lucas LaRochelles talk on Queering the Map, where he pointed out the attempted pink washing by mainstream politics by adopting queer positions without actually changing its destructive policies when it comes to social inequality. I could also see it in Hay Kranens workshop A Gentle Introduction to Wikidata, in which he pointed to the two models of organising online knowledge: Wikipedia itself which is based on a community review process (a great example of the dialectical discourse of humans to come to a shared understanding), and Wikidata, which is based on the logical organisation of content in order to make it accessible to machines.

After a basic introduction into the concepts of dialectics Vera and I asked the participants to follow a set of five steps, and to come up with content for their practical work on chatbots:

Following this phase the participants chose between three different coding methods that differed in their required skill-level, and were well prepared by Vera to generate their own dialectical chat bot.

Vera and I were surprised by the results and the energy of the process. There was, and this counts for the summer academy as a whole, a strong commitment and will to participate by everybody, without anyone requesting to be schooled or taking up the position of a student. I wonder if that was due to the concept of this year, which requested everybody to also give a lecture and gave the whole event the feeling of a classical symposium or conference. I strongly believe this added to my own overwhelmingly positive experience (and let’s not deny that this was helped by the great food provided, and jumping out of the window into the harbour on some of hottest days in Amsterdam’s history). The input I got from all the great lectures and workshops still resonates today, and contacts that were made there continue to inspire me. This is important. 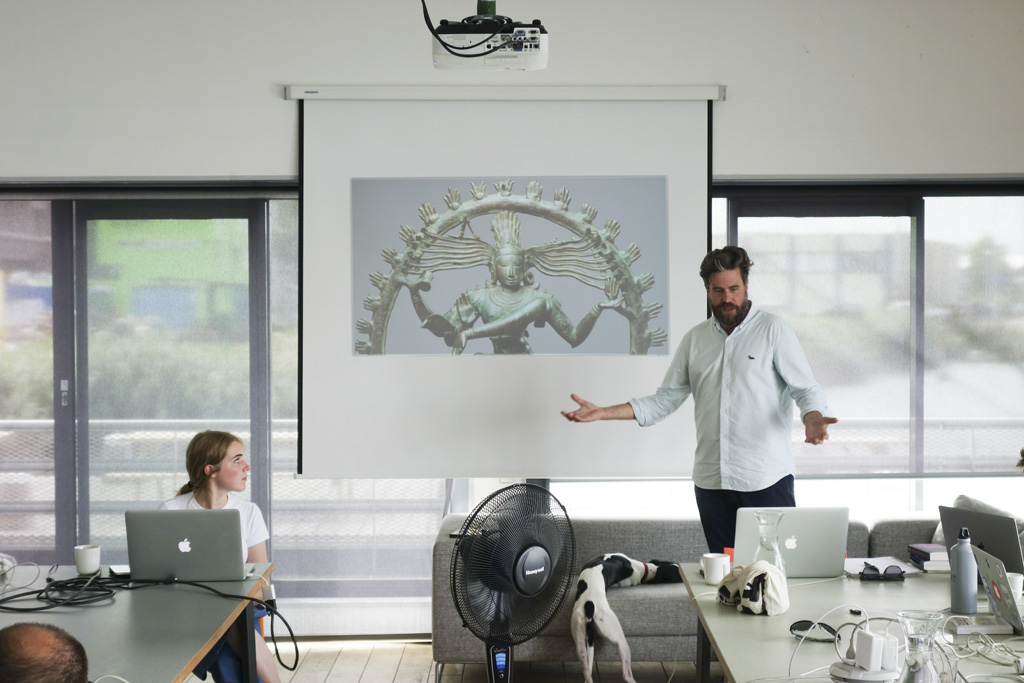