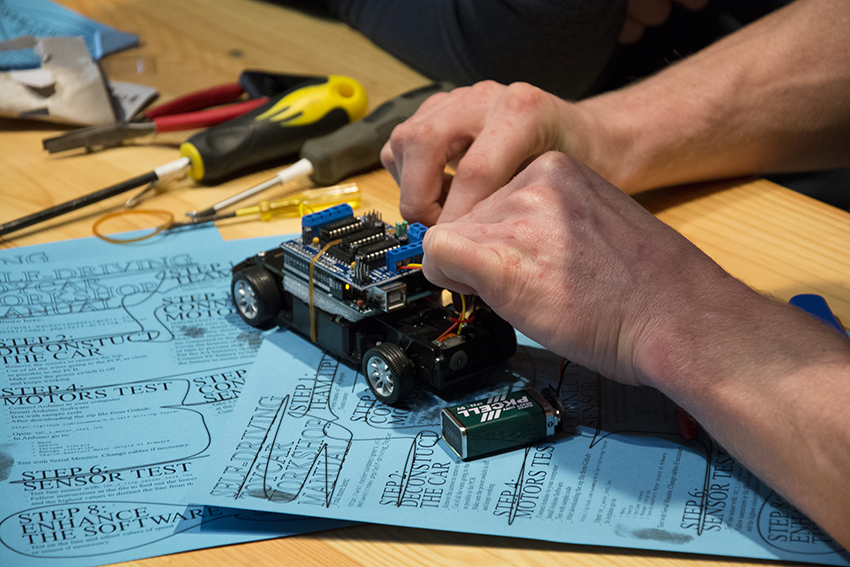 Hackers & Designers aims to create an opportunity to collectively investigate the technologies in and around the self-driving car, discuss and investigate the ethical and philosophical questions deriving from our reliance on technology today; all the while engaging in the process of making a self-made self-driving car. The hands-on and experimental approach to learning therefore stays the focus throughout the investigation. The five ‘levels of autonomy’ (SAE Automated Vehicle Classification based on six different levels) are used as a means to work towards a better understanding of the practicalities of conceptualising and building a self-driving vehicle. The classification system indicates the amount of driver intervention and attentiveness required, and is used as a discursive and communication thread throughout workshop programs leading towards a DIY self-driving vehicle!

Hackers & Designers initiates a multiplicity of hands-on workshops in collaboration with Waag Society and Heerko van der Kooij. So far we turned toy cars into little self-driving vehicles in the theatrical setting of the Frascati Theatre, encountering the performative potentials and ethical dilemmas, workshopped in the artistic context of Today’s Art, critically examined future physical and digital infrastructure with the employers of Rijkswaterstaat (part of the Dutch Ministry of Infrastructure and the Environment, and invited Formes Vives to join an open 3 day workshop. 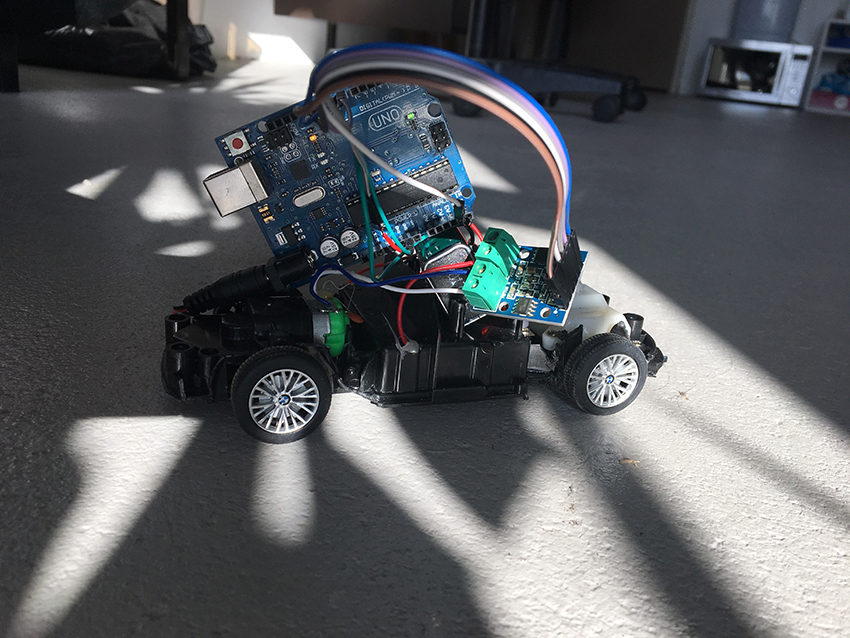 The world is changing with a fast pace and the self-driving car is one example of how our city landscapes will change drastically. It is hard to grasp and predict as technology is accelerating, how it will influence the way we live together. As nomadic urban dwellers we inevitably have some kind of relation to cars. We can however only imagine what the consequences of an implementation of autonomous vehicles could be, and for the time being only create a hypothetical roadmap of how those rolling robots will inhabit, drive and influence our environment. Although speculating on the impact of the self-driving car is very important it remains difficult to imagine how the wide-ranging challenges around the question of implementing the self-driving car will be solved. However by opening up the conversation with diverse stakeholders H&D attempts to point at, discuss and understand issues that might arise–in a public and inclusive manner.

First let’s list the 5 levels of Autonomy (that are actually 6) that are listed on the Autonomous Car wikipedia page:

When talking about self-driving cars, the conversation easily shifts to the moral and ethical decisions, which the cars will have to take. On moralmachine.mit.edu MIT addresses a range of moral decisions autonomous cars will need to make.

A common example is one that Rodney Brooks brings up on his blog: “When the brakes suddenly fail should the car swerve to miss a bunch of babies in strollers and instead hit a gaggle of little old ladies? Which group should the car decide to kill and which to save, and who is responsible for writing the code that makes these life and death decisions?” Those moral dilemmas are quite disturbing as there are no good answers. If we–as humans–are not able to react to those ethical questions in consens, so how could we expect a car to solve this.

An interesting project to explore all the ethical issues around the self-driving car:

Infrastructure changes could become an issue when thinking of a self-driving future. Let’s imagine at some point we all shift to electric cars, we would all need chargers in front of our houses but only after a few years we might have fully automated cars that can charge on their own. We then would have to destroy all the infrastructure that would have been made before.

During one of our workshops a participant said something particularly interesting: “We don’t need all these steps. The cars should simply be smart enough. We then don’t need another infrastructure we just use the same and have the cars to figure it out!”

Previous workshops were attended by students, makers, artists, people from Rijkswaterstaat and other government employers that are privately interested in this subject, or wanted to get into electronics and building things. The workshops and hack events bring up very different opinions demonstrating the varying perspectives around the topic and simultaneously the necessity of pushing the discussion further. The fact the discussion is happening on a governmental level is very important. Even more important that people like us (citizens) also take part in the conversation, voice opinions and give feedback to be able to influence the research, which is mostly based on information from government reports and from the industry. Hacking toy cars is a first step into reflection and engaging with the topic. While offering a DIY and hands-on approach to critical exploration we aim to offer access and possibilities to participation rather than awaiting and undergoing. By only proposing a few lines of simple code you get an idea of how a machine perceives the world, which is much more abstract than the way humans look at the world.

Another way of seeing the world as a self-driving car.

Workshops so far start with each participant getting a toy car in a box. The first thing we do is cutting some wires and taking everything apart to add our own parts. There are a lot of interesting things to discover when you have never done something like that before. Real hacking! 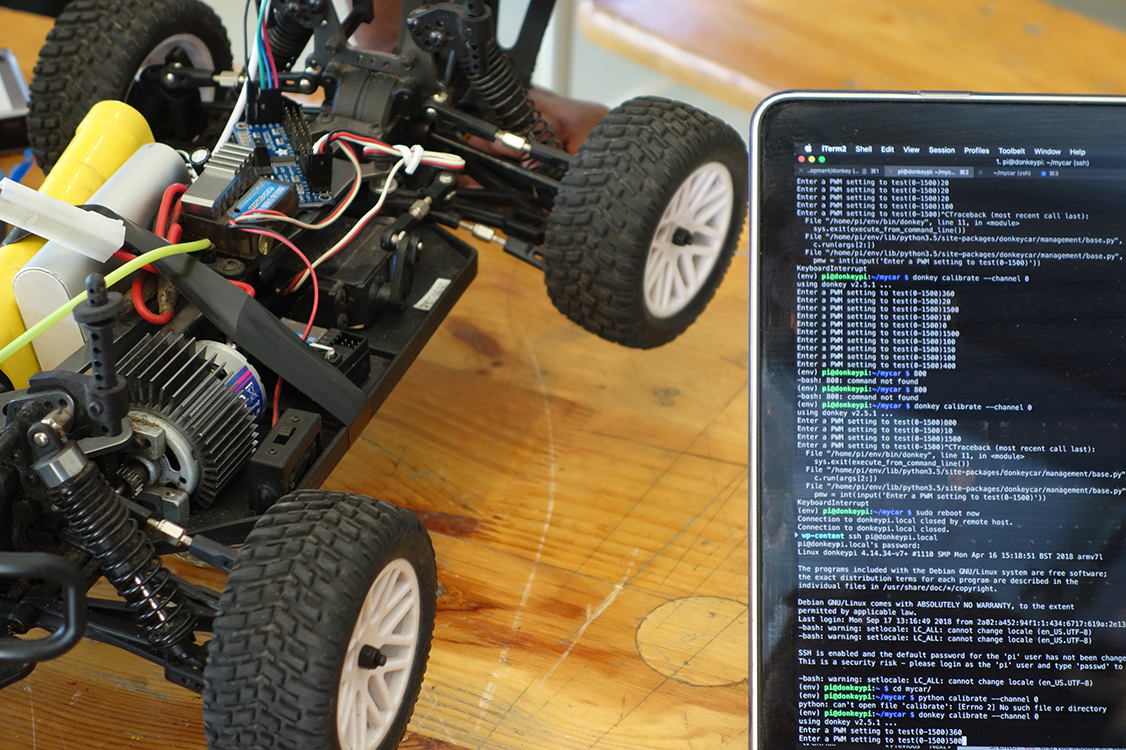 In the latest version of the workshop that we developed for OMG: build your own self-driving car we invited Formes Vives to collaborate. Together with a group of participant we experimented with a much larger car and with Donkey Car that uses rasberry pi and machine learning. Formes Vives proposed to imagine a wide variation of prototypes for these self-driving vehicles thinking of landscape, architecture and mobility. We made sketches talked about them and made some groups to start prototyping models that could fit on our toy cars. We ended up with a self-driving road, a self-driving communist chair, a self-driving park, a self-driving blob, a self-driving climate change survivor train. 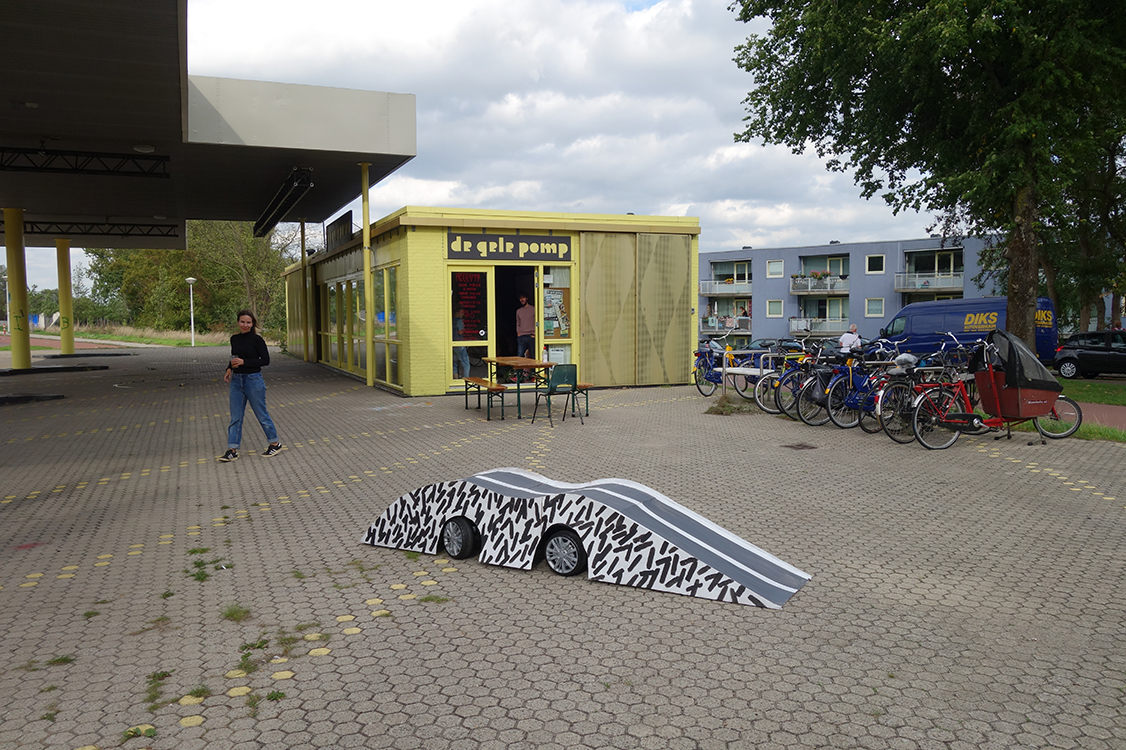 Another take on hacking self-driving cars.

The premise of being able to implement your own code into the real self-driving car is seen by some people as dangerous and unsafe. The level of access could however become a very important game changer. We should have some level of control as individual – or as a not-so-big-company or non-governmental entity – about what goes inside these cars, shouldn’t we? If those implementations are done by a commercial parties we will have to surrender yet again to some capitalist power structure. Big data companies are getting even more powerful, which is starting to become (really) scary. We–as citizens–need to find ways to keep technologies in our hands.

Some scenarios are pointing out the dangers of self-driving cars by imagining the possibilities of cyber attacks. It would not make anyone safer if Facebook or Google are writing the code for those cars and we can’t have access to it. We want to be able to inspect and find bugs. If Google owns the softwares of all the cars in the world we have no way to know if it’s safe or not, if it can be hacked or not.

An interesting speculative short story depicts some important questions raised on this aspect.

The big stakes of the Self Driving Car for the industry is relevant to point out. Users of the product are not central, the stockholders are. We have seen the development of the tech industry in the last years with some very negative side effects. As mentioned in a recent article in The Guardian, Facebook or Twitter built advertising engines not considering mis-usage such as pushing of targeted ideologically charged content to potential voters. These new technologies are black boxes, one can only guess what is going on inside and whether it is in the interest of the ‘common’ people. If all these black boxes start driving around it is urgent to develop an understanding of what is going on in there.

In previous workshops we propose 4 tables with axis. During the hack breaks participants have to position post-it notes on a table depending on their opinions: should the software be open source? Or owned by a company? Should it be structured by the government? Should the car be smart enough to drive by itself? By the end of the workshop we take a closer look at those tables and start a discussion. Surprisingly there are very different ideas: not everyone is going in the same direction.

The workshop at Rijkswaterstaat for instance was an excellent opportunity to pose critical questions at actual stakeholders. The general consensus was, that either the government or Rijkswaterstaat should be in control over the situation. In our circles we tend to think that these processes should be open-source and self-organised. Here the demand was: Norms and regulations, and some international organisation form that creates the set of rules, which can then be implemented by each government. A very strict approach.

In his blog post “Unexpected Consequences of self-driving cars” Rodney Brooks gives a few tangible examples of everyday usage of a self driving car. One example: You want to stop at a bakery to buy your bread but can’t find a parking spot. With a fully automated car you could just leave your vehicle to circle around the neighbourhood and call it whenever your are done. That kind of behaviour could be very problematic socially and environmentally and leaves us to wonder if the model of car ownership will prevail in the future. Shared ownership or cars on subscription could be a better model to distribute the usage of those cars.

But maybe we won’t need cars anymore at all!

An interesting quote of Henry Ford on the first automobile: "If I had asked my customers what they wanted, they'd have asked for a faster horse."

The same news from another perspective.

Make your own self-driving toy car at Today's Art

Talkshow: Baby can you drive my car at Frascati

Hack night: Baby, you can drive my car at Frascati

OMG: build your own self-driving car