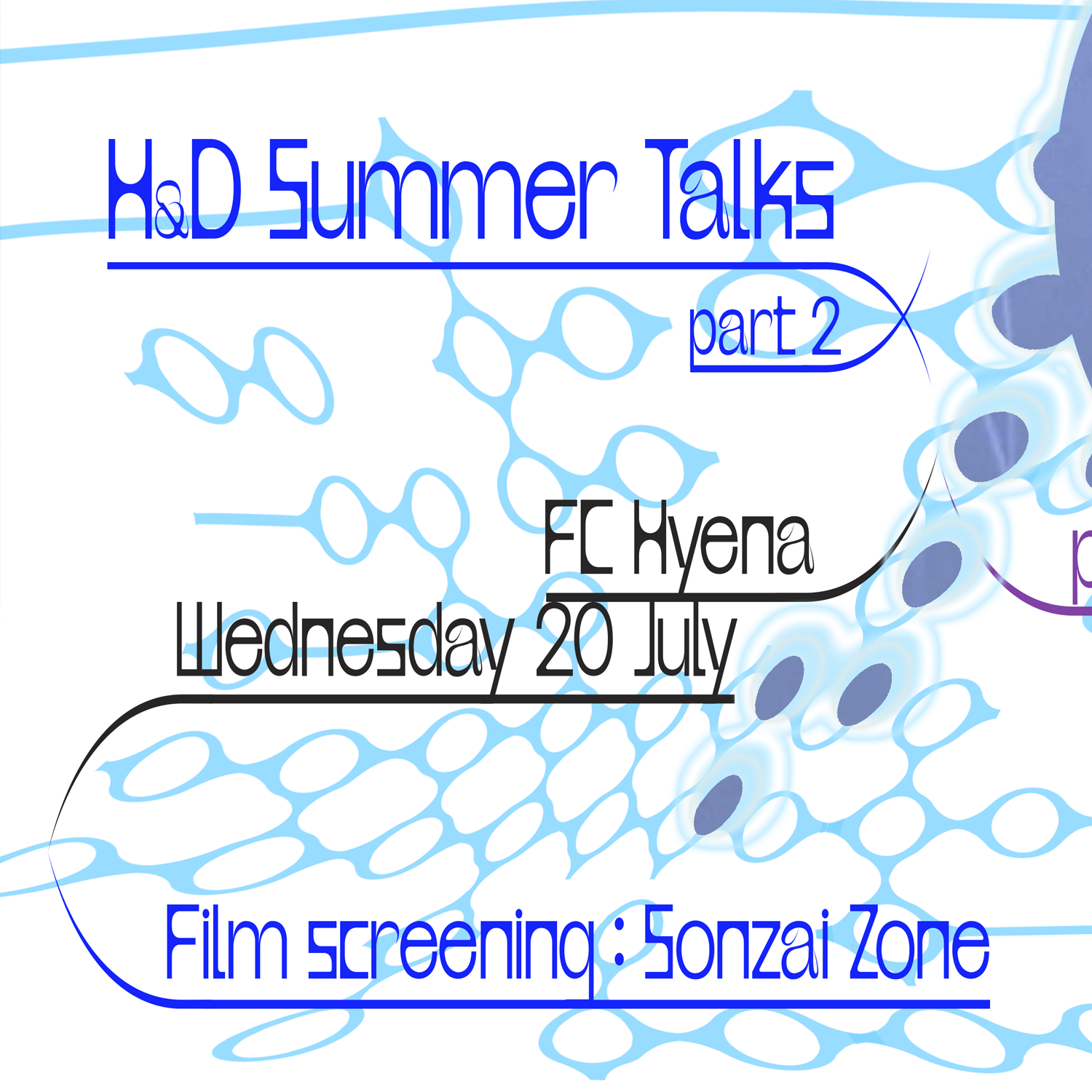 The second event of our Public Program with a film screening and presentation wtih Liminal Vision took place at FC Hyena!

Sonzai-kan 存在感 is a Japanese concept for human presence: a quality of existence or ‘affective atmosphere’ that we can perceive of other people. This quality is often lost in communication through screen-based interfaces, which are inherently not designed to mediate subtle, nonverbal cues about coexistence and affection.The idea that human presence can be mediated over distance in an ambient way has been explored in the field of Human-Computer Interaction already since the late 90s. This research produced a broad range of interface prototypes defined by similar principles: the transmission of peripheral cues about the user’s real-time being. Rather than mediating figurative content between devices, the presence of another person can be experienced in space through ‘expanded affective fields’, stretched over time. Such communication systems are hereby referred to as ‘Sonzai Media’. Sonzai Media have important emancipatory potential as they afford fluid, embodied forms of cognition and communication that could counterbalance the dominant, objectifying and quantifying ways of relating to the planet and to each other. At the same time, this emerging paradigm adds to already existing concerns about agency and power in contemporary media.

Photos were taken by Emilia Martin for Radio Echo

Listen back to the program:

Liminal Vision is a creative collaboration between designer filmmaker Emilia Tapprest (NVISIBLE.STUDIO) and cultural historian Victor Evink (S x m b r a). Grounded in the research field on ‘affect’ and its use through datafication, their work explores the role of value paradigms in emerging technocultural developments through worldbuilding, material artifacts and mixed media. Their research practice advances through different self-standing projects and takes various forms, from cinematic fiction shorts to immersive installations and academic articles.

NVISIBLE.STUDIO is the independent research practice of Finnish designer and filmmaker Emilia Tapprest (b. 1992). Coming from the background of industrial design and interactive prototyping at the Aalto University in Helsinki, she completed her second master in film at the Sandberg Institute in Amsterdam in 2019. With an early interest in ubiquitous computing and ambient intelligence as objects of design, her focus has shifted to investigate implications of emerging technologies and new power arrangements in society at large.

Victor Evink (1987) is a Dutch, Colombian born artist and researcher. He is based in Utrecht, where he received an MSc in History and Philosophy of Science from the University of Utrecht in 2013. His work combines STS research with artistic practice, focusing on the evolution of knowledge, technology and peripheral subcultures. Recently, his focus is shifting towards issues surrounding inclusion of people with a disability in a socio-technical context. In 2020 he co-founded Liminal Vision, conducting conceptual, textual and curatorial work in collaboration with artists and experts internationally.

Working with film, audiovisual installation and performance, Polina Medvedeva explores practices often considered “informal” or “non-conformist,” embracing the complexities through which vernacular and lived experience transcend rigid categories of inside/outside, belonging/exclusion and formality/informality. Her focus on the tactics of civil disobedience and mechanisms of self-sufficiency – improvised, passed through generations as oral histories, smuggled in through migration – speaks of the (im)possibilities of existing within while being against systems of oppression. Medvedeva’s works were exhibited among others at Stedelijk Museum Amsterdam; WIELS, Brussels; Al-Ma’mal Foundation for Contemporary Art, Jerusalem; Sonic Acts festival, Amsterdam; Lofoten International Art Festival, Svolvær; Brighton Festival, Brighton; Inversia Festival, Murmansk. She was a resident at Rijksakademie van Beeldende Kunsten in Amsterdam (2020-2022), a guest tutor at Sandberg Instituut Amsterdam, ArtEZ Zwolle, Gerrit Rietveld Academie and is a tutor and lecturer at the Utrecht University of the Arts.

FC Hyena is about a 15-minute walk from Noorderpark Metro Station (Metro 52).From the bus stop Johan van Hasseltweg (City bus 35) it is a short 10-minute walk.

FC Hyena is wheelchair accessible. You could reach out to us if you wished to attend the event and had specific accessibility needs that should be taken into considerations.

This event was made possible with the generous support of Stimuleringsfonds and AFK.