1. A Luddite is a person who dislikes or is critical of technology, especially technological devices that threaten existing jobs or interfere with personal privacy.

2. Fog Computing is like Cloud Computing, but more local and ubiquitous.

3. Shaders are a way to produce real-time computer graphics. Shaders are written in GLSL which is the OpenGL Shading Language, a C-like programming language that allows you to code powerful graphics programs (aka shaders) directly on your computer’s graphics card.

In this workshop you were introduced to shader programming through a semi-fictional/SciFi narrative. In this journey we were set in the far future meeting as a new breed of Luddites in a post-Fog-Computing world.

We learnt about our roots as Luddites, our relationship with technology in the current situation where Fog Computing has already risen and fallen, and finally we will draft a manifesto, which will establish our take over of the deprecated Fog Network. We will explain Fog Computing as it is “analogous” to shader programming, with the goal of sending our manifesto across the Fog Network, with the help of Eliza Ludd. Who is Eliza Ludd you ask? Well, come to the workshop to find out! 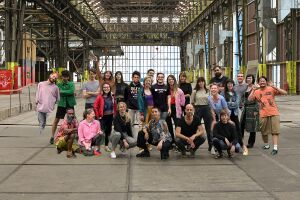 A laptop was needed. No coding experience required Note that this workshop was happening in parallel to another one, you had to sign up!

Thank you for coming..

Here is the code from Eliza Ludd:

You can also see the raw code here

How this works is that you paste this entirely into Kodelife.

NOW its time to remix the fog code!

Next Steps for if you want to use GLSL for live coding visuals and not just Fog Nodes!!!

These are some specific suggestions from me if you want to continue learning but don’t know how to start.

1. Learn the maths from The Book of Shaders

Thanks a lot to all the folks at Hackers and Designers Summer Academy 2019 to make this workshop: Eliza Ludd, the Fog and the Shade come to life.

In the wake of dark patchworks, networked clumsiness and technological dulling, an opening appears between the cracks of lost fiction and the merging of two narratives.

Two centuries ago, at the turn of the 19th century, the Industrial Revolution had grown strong in England. In a period that brought with it great technological advance and the idea of moral and economic progress, the drive to ‘become modern’ had put the livelihoods of many at risk.

New machinery was being introduced into textile and woollen mills across the Midlands, Yorkshire and north-west England. Highly-skilled workers had used artisan manufacturing techniques up until this point, but due to the development of technology, new stocking frames could produce cloth quicker and more cheaply than the trained workers could have themselves. Factory owners were now able to employ non-skilled, low-wage labourers to operate these new machines.

In the decades previous, the government had passed the Protection of Stocking Frames Act after a handful of irregular protests. Now, several groups of textile and woollen-mill workers had begun to more formally organise themselves, and an influx of riots began in 1811 onward. These workers soon became known as the Luddites.

The Luddites would write to factory owners and members of Parliament, calling for them to remove the new labour-saving machines in a bid to protect their working rights. When those addressed did not comply, the Luddites would attack the mills nocturnally and smash the machines in dispute. The revolts culminated in the introduction of the Frame Breaking Act, making their well historicised intervention with technology a capital offence.The leader of the Luddites, Ned Ludd, may or may not have been real. Some have authored that a Ned Ludlam was an apprentice frame knitter who destroyed two machines in 1779, though this story remains apocryphal.

The mythology of Ned Ludd, General Ludd, King Ludd, and the Machine Breaker in his many guises, created a fiction that could be actioned and assumed en masse. His name was authored across ballads, declarations, manifestos, and ubiquitous threatening letters.

Theorist Marco Deseriis defines Ned Ludd as an ‘improper name’, or “the adoption of the same pseudonym by organized collectives, affinity groups, and individual authors”.1 Nuance appears where the name Ned Ludd detached itself from its originating context. He writes:

“The name Ned Ludd designates two asymmetrical forms of struggle. On one hand, Ludd expresses the resistance of the last guild masters and apprentices against industrial capitalism. On the other hand, as it enters the Northwest, it comes to designate the emergence—albeit still in embryonic form—of a modern form of class struggle all internal to the capitalist mode of production.”2

Whether real or unreal, Ned Ludd’s collective identity became actionable in the political circumstance its users found themselves in. Ned Ludd was malleable, performative and constructed when and where was necessary:a fiction as literary weapon.

Many of the Luddite’s letters are stored at the UK’s National Archives. One of these is of particular interest to our story today. Marked ‘A’ and dated April 30th, 1812, its words were authored by an ‘Eliza Ludd’: the only non-male pseudonym deployed by a Luddite within a letter. Eliza’s words offered unique awareness and a literacy of politics that its counterparts did not share in, the vast majority of Luddite letters were violent threats. However, in the absence of knowing Eliza Ludd and anything beyond the words written inside ‘A’, their fiction remains in the shadow of another.

Today, machine breaking and technophobia have reduced the Luddite narrative to a colloquial stigma, though it is no longer machines that need breaking but the metaphors that obfuscate our literacies of them. What might a reclaimed and re-narrated Luddism—fit for the 21st century User—look like?

“Let me persuade you to quit your present post, lay by your sword, and become a friend to the oppressed, for cursed is the man that even lifts a straw against the sacred cause of Liberty.” Eliza LuddApril 30th, 1812

James Bridle has described our current condition as a ‘New Dark Age’, evidenced by a century-long history of ‘computational thinking’ that has reduced our realities to data and framed everything quantifiable as fact. He details the failure of technological acceleration to equally transform our understanding, making a call not for new technologies, but new metaphors and “a metalanguage for describing the world that complex systems have wrought.”3

Metaphors are powerful tools that help us understand and relieve the unknown. The metaphor can be productive: it allows information to be accessed and understood by an audience who before might have not. But, at the hands of some, the metaphor has become a means to directly abstract and obscure.

The Cloud, our omnipresent figurehead, is the corporation-made mediator between human and machine. What was once a fuzzy circle, puffball or thought bubble, soon became visual shorthand for electrical engineers during the 1950s. The Cloud’s shape and iconography alleviated the need to explain the complex infrastructure it alluded to.

Today, the Cloud looks hugely different, incumbent as the data centre within a new breed of non-human space. However, we should know by now that no technology is ever safe from the rush of time, greed of money, and ‘progress’ as we’ve come to call it. The Cloud is not exempt from this and is soon to become obsolete, made redundant by something newer and more insidious.

After the Cloud,came the Fog

Fog computing is to be technology’s evolution of the Cloud, the Fog its next metaphor. In what can be understood as the Cloud coming down and surrounding us is, in reality, decentralised and ‘mini’ data centres known as fog nodes. However, the Fog’s metaphor might risk dulling our understanding of technology completely.

The fog consumes, engulfs and abstracts, obscuring our orientation to the space of mental and physical capacities. The ‘fog of war’ describes a situational uncertainty caused by the chaos of battle, and when we talk of developing ‘brainfog’ we describe a cognitive dysfunction that produces problems with memory and mental clarity.

To divide the fog in two brings forth a useful partition to navigate its problematic. The Fog (proper) we can conceive of as the computational system and network architecture known as fog computing. The Fog will bring Cloud computing closer to the user as an additional ‘layer’ within the Cloud’s ecosystem. Described as a critical and exciting opportunity, the Fog will help further enable the Internet of Things across smart devices and industrial infrastructure. At present, the Fog is caught within a storm of R&D, funded by a techno-guild of Cisco, Dell, Microsoft and Intel, among many others.

The fog (abstract)—differentiated by lowercase f, but no less signficant—is symptomatic of our New Dark Age. The fog renders us in a state of perpetual confusion, at loss from a clarity to the technologies we live by and use everyday. That said, James Bridle makes clear that a New Dark Age is not a time in which nothing happens, nor an age in which things are not possible. Instead, he maps out the darkness as a space to think things through we’ve not been able to before. Could the fog be productive?

If we can conceive of the metaphor as a technological system, it is one that might implicate as much as its computed counterpart. If we are to think of the metaphor as machine, then we must know how to pull the plug. Shall we go fogging?

We’ll DDoS the fog in one attempt, and censor it in another. Should that fail, in spite of a code that won’t compute so mathematically, we’ll brand it. We’ll saturate the fog and flood it with popular culture. We’ll script the fog in acts of three and roleplay it start-to-finish. We’ll confine the fog to download speed and corner its bandwidth allowance. We’ll forge, tamper with and spam its metaphor, disguise ourselves as Eliza and jam the fog with colluded data. We’ll invoke the fog into other metaphors to contradict itself and mediate a non-computed tussle. We may even try to mask the fog, though its potent source will dare to remain.In the face of its mounting corporeality, we must accelerate the fog, exercising it visually and textually to the point of overdrive. The fog in overdrive might lead to override, and overriding its unknown might help us to disarm it.

Eliza Ludd & the Fog is a story already written, but yet to be told.