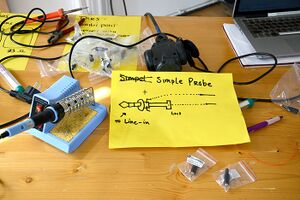 Dennis de Bel hosted a one and a half day workshop in which the participants created an edible computer network infrastructure and preferably a great soup. Besides soldering simple hardware, the participants received an introduction into encoding and modulating data into various formats suitable for transmission over precarious networks. The workshop got them to master basic techniques and tactics to build and use networks made from organic matter but not limited to edible media and applicable to a wide field of interests, be it sound, music, performance, cooking, life.

sending mantras by building own speaker that resonates on 136Hz? So, if 136.1 Hz is the OM tone, why? Is it based directly on something quantifiable in nature, such as the cosmic background noise, Kepler’s Harmony of the Spheres, or the Schumann Resonances (the constant rumble within the Earth’s ionosphere created by lightning strikes)? Interestingly, while 136.1 Hz is between a C and C# using standard concert pitch (A = 440 Hz), it is precisely a C# when A is tuned to 432 Hz. #spirituality #radio #transmission

Minimodem synth. Now reverse: use minimodem as a synth, to play along with the music. #sound #invertedpurpose