The following text is a transcription from a presentation given during the Universe of [ ] Images Symposium, which was co-organized with Froh! at fanfare in November 2018.

Colm O'Neill is a designer and researcher who works with notions of digital literacy and control in relation to digital technology, and more specifically in relation to graphic design interfaces and the means of mediation that come with them. Interfaces are often presented to us as mediators rather than dominators or controllers. However, these smooth, visual curtains mediate our first encounter with technology and our experience with it. They are often very persuasive and intuitive, so we don't tend to question them. Colm researches this issue and tells us why we may need to look through these curtains and start questioning them.

Colm: The work and research I will speak of here is not really my usual practice. I am a graphic designer and I practice mostly web design and web development. This research was part of the outcome of a masters I finished last year at the Piet Zwart Instituut in Rotterdam. My work as a graphic designer and web developer could also fall under the term ‘tool curator’, a term that I borrowed from a text called “Privacy After the Agile Turn”.[1] Within the realms of users, makers, and software I would be somewhere in the middle. I'm not just a user of functioning software and I'm also not a pure developer. Instead I sit in-between, using and selecting software that other people have published for the different people I work with, whilst trying to understand what they might need for their websites. In this context I have very regularly been confronted with the loaded term that is ‘digital literacy’. I feel that end users are struggling more and more to understand new software, what it does and where it works, and it's not their fault. The methods through which we are able to access to these tools and technologies are not made in such a way that it is easy for us to pass the wall of the interface. At this point I should also mention that a lot of my work and research is informed by a collective I work with in Brussels called Open Source Publishing.[2] It is a non-profit that I have been a member of for the past four years, but it has existed in various forms for about ten.

We can talk about interfaces in many different contexts, but I chose to stay within interfaces that we all have access to. Whatever the brand of phone or laptop you use, I look specifically at how language is used on the web as a way to be inclusive. These languages allow us all equal, but possibly unbalanced, access.

There are several dimensions that contributed to my arrival at the idea of adversarial interfaces.

This kind of tongue in cheek attitude online has a function, and I would like to propose why I think this kind of language exists. What we are looking at is not a brand new phenomenon, but it is becoming more and more common. A text by William Davis proposes that the function of this colloquial, friendly language is erosion—the erosion of the boundary between the different personas we may have as people online.[3] We use the internet for many facets of our lives, be they professional or personal. Davis proposes that the personal and familiar language functions to lower our defense mechanisms, and breaks down the differences between what we consider our personal and our public personas online. Platforms use this language for their marketing and for collecting more accurate and personal data. In eroding the boundaries between these different personas they can better exploit our data, which is clearly happening in the use of these rhetorical turns of phrases.

Davis’ examples are ones that you may well have encountered, and his text points out the ways in which we may sign up to a platform, and are then directly addressed by the platform. For example, a few years ago you would have had to indicate your date of birth under the title "date of birth", but now you might be asked by the platform to "help us out celebrate your birthday!". These are very different ways of addressing the user. It it similar to how Facebook addresses you with "how are you?" or "what's on your mind?", which can be seen as an invitation to express yourself in the most open manner. It's interesting how bits of seemingly discardable language hold a lot of meaning, showing us how the platform intends itself to be used, and thereby suggesting what it wants to get out of us.

I think it is important that there are many different types of platforms and softwares. Some which cater for those who desire seamlessness, and some for those who desire a transparent approach, as I do, and wish for more of a hands-on interaction, where you are able to launch all of your applications separately, manually.

The ideal seamless interface would let you to jump from one application to another with no transition, and these applications would interact with each other in the background. It used to be that a designer could simply be a ‘web designer’, now we have all kinds of titles: ‘experience designer’, ‘user experiences designer’, ‘user interface designer’. These are very different titles that are used on platforms like Linkedin. These tasks are clearly thought of actively. Olia Lialina, the Internet artist and theorist, uses her work to acknowledge these transitions in language that we are experiencing. For example, where the word ‘computer’ is substituted for the word ‘technology’, the word ‘interface’ for the word ‘experience’, and the word ‘user’ for the word ‘people’.[5]

What I fear is the logic of totality. Totality is a hard thing to explain. In many cases it is a concept that is used critically. For example, it is used to describe capitalism, a system which we are unable to see the outside of—it is a totality. These shifts in language build towards the idea of the web as a totalised space, where it is impossible to be on the outside, to break out or to consider alternative forms. Of course, that totalised space does not exist, the web is made up of many, very manual, components. Using the word ‘totality’ is problematic. With regard to capitalism, books have been written that explain why you can't allow yourself to define things as totalities when speaking critically, as you're basically denying yourself access anything outside of what you are critiquing.[6] But this is still something I am afraid of, particularly when thinking back to the people I am trying to work with who are users, and who don't necessarily have the time that I have to explore and to change operating systems and find other types of software. Many people who are presented with these seamless interfaces think that it is the only way you can interact with the web. It can seem that getting out of it is impossible, because it's difficult to say where to start. How would you know how to approach it?

Luckily, I am not the only one thinking about these issues. This research takes the form of a website where you can find texts that have informed the project and various aspects of the research. In his book Adversarial Design, Carl Disalvo describes the concept of ‘adversarial design’ as a way of thinking about the politics of design. He calls adversarial design "design that does the work of agonism".[7] This is a political theory that suggests it is interesting for politics to embrace dissensus. It hails from what political theorist Chantal Mouffe outlines as agonism within the existence of conflicts in certain political situations, and how it should be used to reflect on how we interact with each other, how we live together, and how the various politics of our societies are built.

Artist and researcher Silvio Lorusso has a project that I find very interesting, through which he he introduces the concept of ‘nannyware’. Some examples of this in action are when you put your phone to maximum volume, and it says on the screen "you should be careful and not pass this limit to not damage your ear", or when using the nintendo Wii it asks "shouldn't you take a break and go outside?". There's also a browser extension called Stay Focused that tries to get you to concentrate, acknowledging how distracting the web can be. The extension lets you become distracted and observes the kind of activities you undertake on your laptop, and what software or sites you are using. Then this sentence appears: "shouldn't you be working?". Silvio Lorusso took this specific message and printed it, then distributed it as widely as possible.[8]

There's an example of a type of plug-in that Joana Moll is developing, that could be a way to show what an adversarial interface is. It's a tiny, simple button in the corner of her website that reveals the wastage of a webpage by telling you how much energy it uses, and how much pollution is generated, to get you to a specific page on your browser.[9] This is another way of addressing users, and revealing what the infrastructures of the web consist of. Another similar project was initiated a few months ago by Low Tech Magazine. Their website was recently redesigned, and they decided to really embody low tech by addressing all the ways in which the resources of the front end of the website were managed, but also by making their server mostly autonomous. One of the team members lives in Barcelona and has a solar panel and a web server on their terrace, and they run the website from there. So if you visit the Low Tech website you see a battery status on the page.[10] It's strange to be on a website and see an image of a battery that says "5%". What could it mean? These few simple symbols invite many big questions. Low Tech speak about it extensively so I would invite the readers to check it out. It also means that you can go on the website and it's simply offline.

[5] Olia, L. (2014) Not Art&Tech, On the role of Media Theory at Universities of Applied Art, Technology and Art and Technology [online] Available at: http://contemporary-home-computing.org/art-and-tech/not/ [Accessed 10 October 2016].

[6] Gibson-Graham, J. K. (1996) The End of Capitalism (As We Knew It): A Feminist Critique of Political Economy. Oxford UK and Cambridge USA: Blackwell Publishers, p299 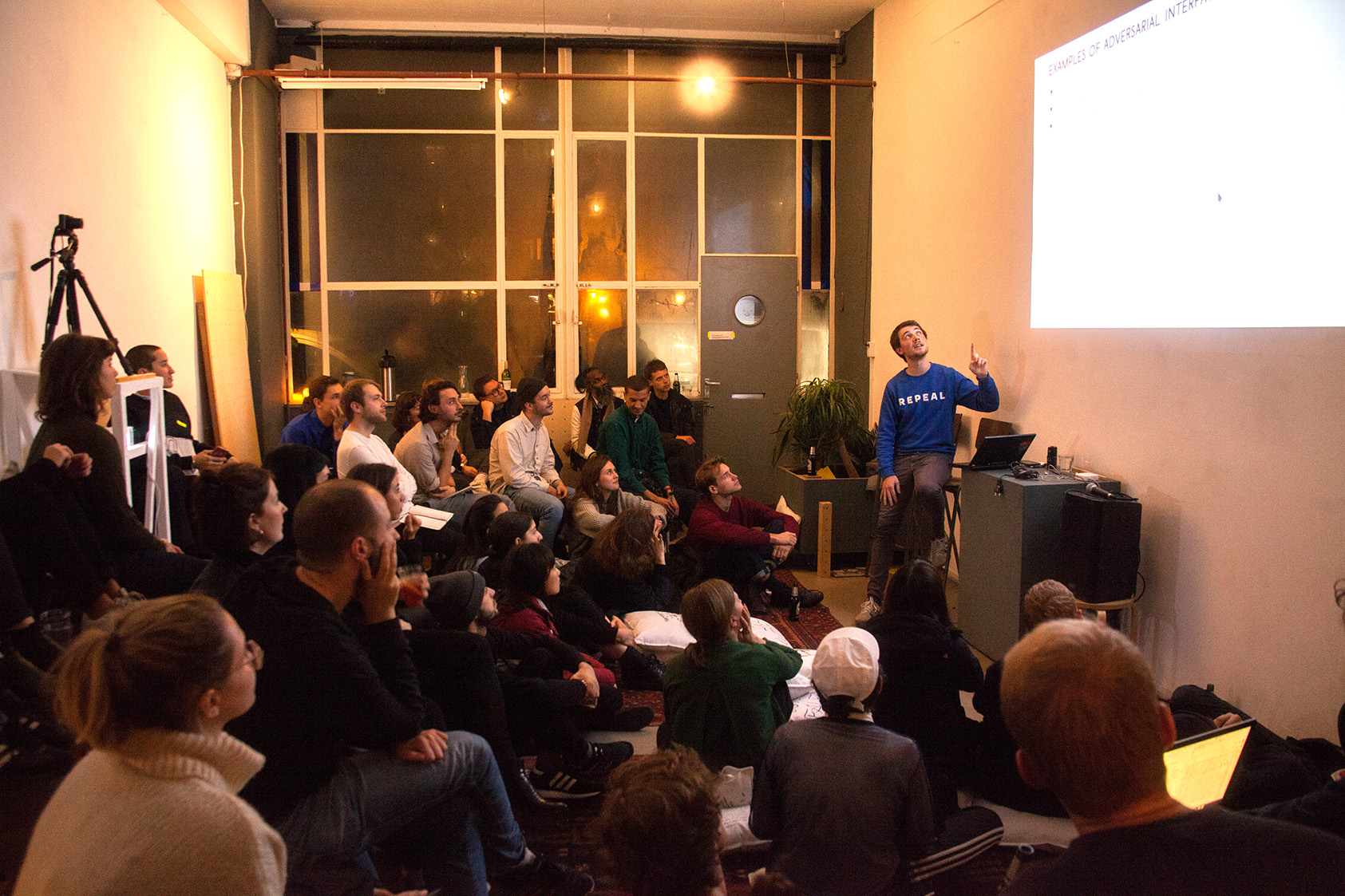