Difference between revisions of "Yin Aiwen" 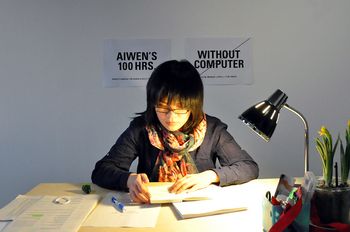 Yin Aiwen is a Chinese designer, researcher, writer and video artist. She received her Master Design from Sandberg Instituut, Amsterdam in 2013. She is currently a fellow in The New Normal 2017, directed by Benjamin Bratton, in Strelka Institute for Media, Architecture and Design, Moscow. She has been a visiting instructor at the Design Department of Sandberg Instituut since 2015 and will be teaching in the Shadow Channel, Design, Film and Propaganda program in Sandberg Instituut in the fall of 2017. Her work explores the future possibility of design that emerge from techno-political climates and interpersonal complexes through performance, installation, writings, video and documentary.