During the Universe of [ ] Images workshop I explored methods of enhancement that can enrich an image’s affective quality rather than their resolution. How can we embed invisible metadata and associative meanings into the perceived surface of an image?

Since images play an increasingly important role in shaping our realities, I feel it is important for us to question our methods of constructing meaning from the media we consume.

The following text is a string of thoughts that was collected during the course of the workshop, while exploring the tension between what is real and what is imagined.

There are two main types of image compression: ‘lossy’ and ‘lossless’. Lossless compression maintains data from the source, while lossy compression abandons data. A JPEG—shorthand for the group that proposed the standard, the Joint Photographic Experts Group—is a lossy compressed file optimized for the web.[1] At a standard 72ppi, compressed images are light and quick, but often viewed as a lesser version of the ‘real thing’.

Image virality leads to deterioration.[2] As an image increases in popularity and becomes more widely shared, it decreases in resolution and thus becomes less valuable.

Urban Dictionary: Deep fried memes (n.) When a high quality meme is screen shot, reposted and re-filtered so many times over that it has a yellowish, low quality resolution and looks like it was deep fried.[3]

Labeling an image ‘deep fried’ reflects the negative connotations often associated with degraded images, which are rarely preferred to their ‘fresh’, pre-compressed selves.

Maintaining a high resolution viewing standard is a form of aesthetic formality saddled in an attempt to maintain the integrity of the images in their truest form.

High resolution images do exist online along with image upscale and enhancement technologies. Crisp satellite images of the Earth are accessible online in their fully pixelated perfection, with minimal compression degradation.[4] Despite the clarity of these images, their ability to accurately portray reality is still questioned. For The Flat Earth Society,[5] subtle details like the shifting hue of the ocean’s color are enough to discredit the photo’s legitimacy.

Although image quality is often conflated with reliability, polished visuals are becoming increasingly untrustworthy in an era of easy image alteration. With the globalization of image deceit, slick aesthetics signal a constructed truth, and can thus be seen as the inverse of reliable.

The invisible pure data of an image reveals its origins along with traces of its alteration. This invisible information is impossible for humans to sense without access to mediation. Retrieving metadata requires a more time costly engagement with the image.

The surface of a highly compressed image communicates like a telegram. A visual diet lacking in high resolution encourages increased viewing speeds, and image binging becomes the default mode of consumption.

The Rubin Vase is a popular optical illusion that provides an example of the variability of our perceptual system’s method of image interpretation. Ambiguous figures like these demonstrate that a single stimulus can result in more than one precept.[6] With concentrated viewing, a person can learn to interpret the image in multiple ways.

“The gap between seeing images and experiencing what has been seen is a very large one. Sight is transformed into subjectivity in much the same way that internal images are a platform for the imagination, little of which can be explicitly linked to the seemingly concrete specifics of vision. This is why reverie is such an important concept. The demands of viewing and thinking about experience are so multilayered that a distinctly human kind of openness is required in order to make the entire process work.”[7] 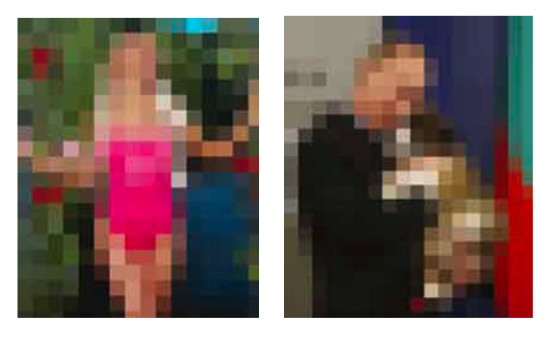 People’s ability to synthesize mental imagery differs. Adam Zeman calls an above-average ability to create vivid images hyperphantasia. Aphantasia is the suggested name for a condition where one does not possess a functioning mind’s eye and cannot voluntarily visualize imagery.[8]

Captions become increasingly important for a viewer to interpret an ambiguous image. A meaninglessness surrounds a pixelated image which can only be identified by the addition of a caption.

ASCII (American Standard Code For Information Exchange) transforms an image to text. Since it does not have a readily available form it is more open to interpretation. Embedding text in an image changes the conventional notion of how images are viewed by transcending the temporal constraints of perception. It encourages slow interpretation rather than a jumpy or distracted scanning. Embedding captions in ASCII images is a method for post-compression meaning enhancement that encourages thoughtful and slow-paced consumption. The image is as clear as mud and light in bytes—imaginary pixel perfection.