How Many Possibilities Are There in a Weaving Pattern? A Collective Outcome by Celeste Perret

I applied for the Hackers & Designers summer school with a proposal for a workshop on weaving binary language. This idea is also connected to a project that I am currently working on, and it all started with the question: how many possible patterns are there in a weaving pattern?

In general a weave consists of a collection of repeated patterns, these patterns themselves are built up by a square of cells, which are binary. A thread either goes under or above a perpendicular thread; black or white, one or zero. The number of cells in the width and length of the square are equal and greater than two. These patterns form a grid. But what if instead of using repeating patterns one uses non-repeating patterns, which are still equal in size? This creates a grid of a limited size, depending on how many cells constitute a pattern. In order to know the size of this grid, one needs to calculate all the different possibilities. When doing the calculations and writing the code the following result emerged: there are infinite possibilities.

The idea of non-repeating patterns was used as a framework for the Hackers & Designers workshop. The results of all the different patterns that used a pattern size of two by two cells were printed on paper, and each participant in the group composed their own arrangement. From there we calculated what the chances were that two participants would come up with the same arrangement. For the sake of the reader the calculations are left out here, but the number of possible patterns using two by two cells per pattern is 16.

Imagine multiple people arranging and weaving the 512 different combinations using a pattern size of three by three cells. This would be analogous to a performing a subroutine in parallel— multithreading. The code that generates the images operates in very much the same way by executing the same line of codes, a loop, across all the possibilities. But the connection between computing and weaving is more fundamental than this comparison; the Jacquard loom, where individual cells/pixels can be set, was a predecessor of the modern day computer, both in logic as well as in its creation of an image. The instructions for creating an image on a Jacquard loom detail the use of punch cards, which ensure the same image can be exactly replicated using an elaborate mechanical mechanism. This method of writing a set of instructions was then used by the first wave of large-scale computers, before magnetic storage such as floppy disks were invented.

During the summer school I worked with someone to improve the tool that creates these pattern images, and this project has since continued. I have been experimenting with materials by using different types of yarn, and with weaves that have a pattern size of three by three cells which are created on a computer supported loom. The computer reads the pattern and holds up the yarns accordingly, and I weave in the weft. I am currently trying to make the images visual by applying this method to other media, for example laser cutting the combinations in wood and placing them on top of each other. To apply the method of the compression of textile in the weaving, I look at the quality of the textile. The fact that it is flexible, foldable and possible to cut through makes this compression possible.

For the curious mind here is a link to my Instagram: _celestegrace_, it contains images of this work in progress. 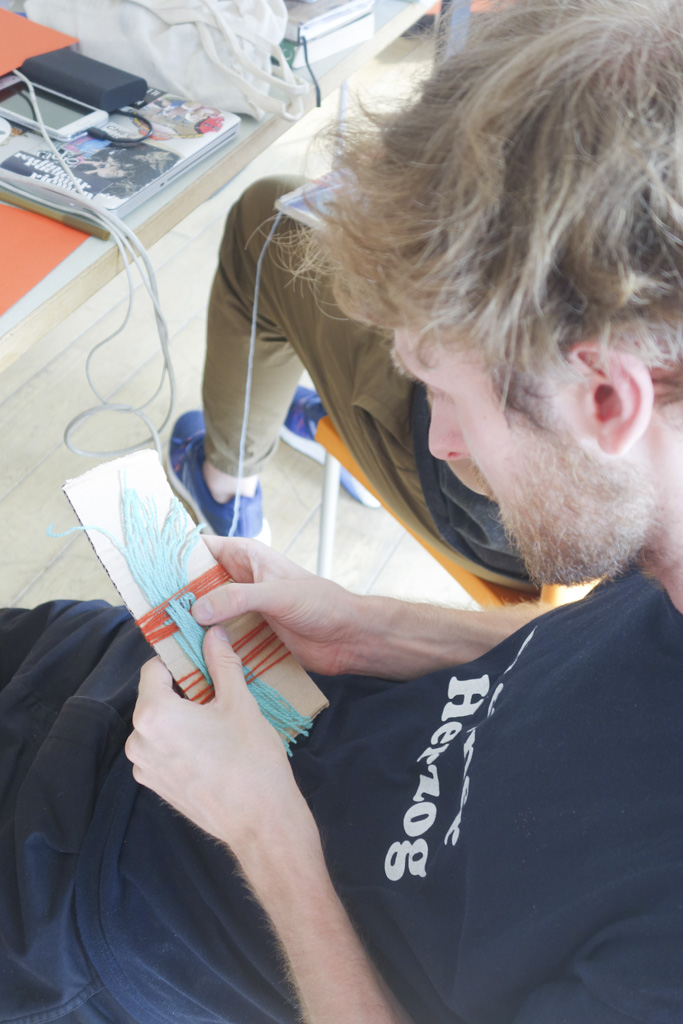 Celeste Perret was a student in the TXT (Text and Textiles) department at the Gerrit Rietveld Academy.