By 2018, despite my best efforts to push an agenda of de-professionalization in 2017, Hackers & Designers had formalized into a stichting (non-profit entity), and the number of individuals involved began to increase. This introduced a need for a formalized infrastructure, which included transparency and clarity regarding what labor was being performed by who, and for what reason, in order to justify the appropriate dispensing of funds.

The Basis, the original formal definition of the coop model as written by James Bryan Graves, January 7th, 2018:

The Hackers & Designers Coop is a proposed model for a collaborative organization based on fiscal democracy.

Practically, the budget proposed to Stimularingsfonds for 2018 pre-dated this coop proposal, and it therefore will need to be evaluated and combined with a project description. The definition of a project is loose by design, but it should not be too large or too small, for instance HDSA2018 should be divided into smaller projects.

The set of rules for the coop takes the form of a codified list, and therefore the algorithmic translation of it was relatively trivial. Furthermore, as the context of coop proposal was during the height of the blockchain hype, the software stack for the coop algorithmics, or ‘platform’ implementation, included a private Ethereum blockchain with a DApp (distributed web based application) interface. The intention was to critically explore the technology by ‘eating our own dog food’. The coop software platform implementation was the first proposed and approved coop project. 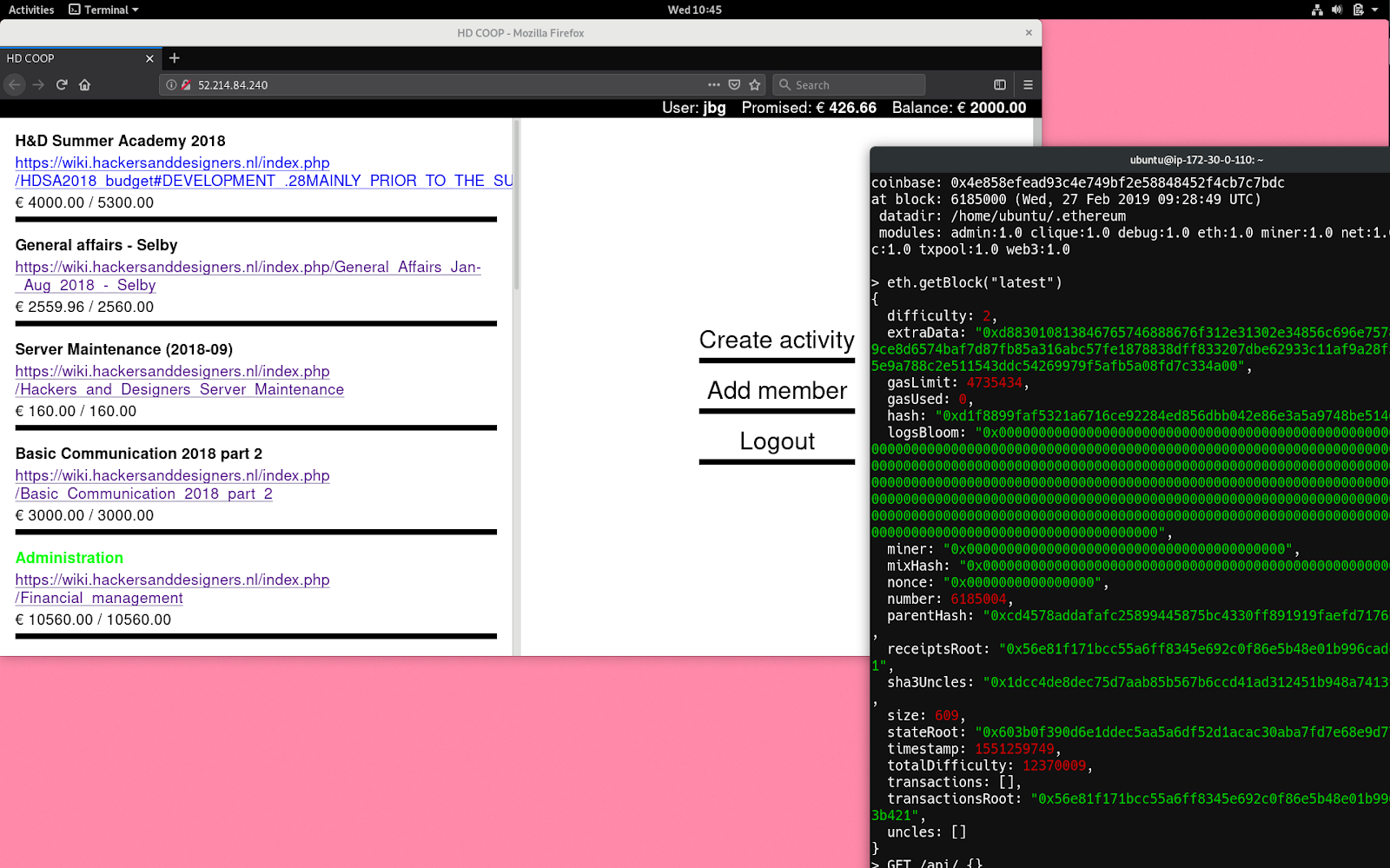 The budget for the coop platform project was purposely small, and a ‘release early, release often’ strategy for development was borrowed from the lean world of startups. Unfortunately, these combined approaches proved tragically ineffective, as the members of the coop, who were also the users of the platform, grew increasingly frustrated by user experience (UX) manifest in the overly simple web interface, bugs, and lack of clarity in manipulating the blockchain.

This software has been abandoned by H&D, however, the coop structure persists. The software was adopted by Peerparty in the Peerpolls code base, and many of the original issues with the blockchain manipulation have been addressed.

I personally believe most of the internal questions and desires for operational clarity were ultimately answered by the adoption of the coop protocol. Although, there does seem to be a reluctance by newer members to propose projects, or to suggest what projects should look like, but these problems are easily addressed via communication within the coop.

NOTE: I left the organization halfway through 2018.