Tanya Ermolaeva and Leon Butler’s workshop on Kinect 2.5D data modelling introduced the idea of the data double with reference to the Germanic doppelgänger. That lore holds that spying one’s double moving through your reality is a harbinger of your coming death. Historical figures from Abraham Lincoln to Queen Elizabeth I and Percey Shelley all wrote of seeing their double before their demise.

The data double describes the encoded counterpart of your embodiment that exists in surveillance systems (Haggerty and Erickson, 2000). As a concept it has become easier to acknowledge since social media configured an appreciable data double upon each of us using the technology. The literary double dwells in the realm of the paranormal—the anomalous phenomena that are the preserve of weird science. Like the literary double, the data double proposes an encounter with a body that is you, but not you. What might it mean then to link the scholarly understanding of the data double to the uncanny affect of the double of lore?

While kindred to the double of literature, the data double is articulated within a different medium: this means that its affect will feel different. In the Weird and the Eerie (2016) the late Mark Fisher delineates the eerie (and the weird) from the Uncanny. Numbering among Fisher’s examples are readings of Under the Skin, Quartermass, albums by Brian Eno and the films of Kubrick and Tarkovsky. Fisher states that “the eerie, by contrast (with the uncanny), is constituted by a failure of absence or by a failure of presence” (Fisher, 2016, p61).

The data double corresponds to traces of your activity registered in databases when you interact with digital technology. From action, intention can be inferred. Shoshana Zuboff’s conception of Surveillance Capitalism (2019) figures corporations like Alphabet, Facebook and Amazon—platforms that concentrate networked computational capacity - as driven by the pursuit and accumulation of behavioural surplus. While it is beyond the bounds of this short essay to do Zuboff’s argument justice, her concept of behavioural surplus critically contextualises how the aforementioned habits of interaction have been (and continue to be) utilised to build predictive models of each of our consumption preferences. Behavioural surplus articulates the political economic stakes of this condition through relating the contestation of decision rights involved in this unprecedented dynamic to questions of authority and power, as Zuboff puts it “Who knows? Who decides? Who decides who decides?” (Zuboff, 2019, p371).

“predictive insights … constitute a world-historic competitive advantage in a new marketplace where low-risk bets about the behavior of individuals are valued, bought, and sold.” (Zuboff, 2019, p172) [emphasis added]

The behavioural surplus avatar that exists of you across databases goes further than the filter bubble: it is a predictor of your future wants and desires, your psychological vulnerabilities, and increasingly—simultaneously—of your internal biological frailties. Your data double models, then calculates facets of your embodied existence towards various endpoints: age bracket when you could be adjudged a property seeker, probable morbidity from inherited traits, kink compatibility score. As the shadowy domain of data brokers attest, there is an asymmetry between how we are known as data by those that possess the databases. We cannot grasp or apprehend how we are known as data.

“a sense of the eerie is created and sustained simply by withholding information” (Fisher, 2016, p126)

In the lore, the double was an omen of the ultimate finitude that a sentience can confront. Concerned though it is with modelling you towards endpoints, the data double does not admit finitude in terms comparable to the double, the latter foreshadows the temporal-spatial frames of reference that we are accustomed to understanding our expiration. Databases exert their force on timespace differently to the passage of duration we are habituated to. These databases are then utilised to modulate the performance envelope our embodied minds chart through timespace.

There is shared concern between Fisher’s Weird and The Eerie and Zuboff’s Surveillance Capitalism. Fisher writes that “capital is at every level an eerie entity: conjured out of nothing, capital nevertheless exerts more influence than any allegedly substantial entity” (ibid, p11). The data double is an avatar by which we can imagine influences intruding from our predicted future into our present. As it anticipates us so should we in turn bank on its eeriness. How we might acknowledge that eeriness was suggested by the influential human computer interaction meme, which Leon and Tanya related the data double to: Masahiro Mori’s Uncanny Valley (1970), which can be translated as the Valley of Eeriness*. 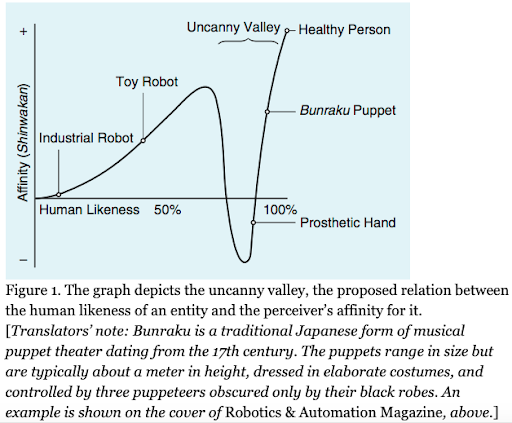 The Uncanny Valley began as an idea articulated in a graph, a memetic diagram. It has been wildly successful, as data now exists that fits to the original curve. The Uncanny Valley (pictured above) took an anxiety as old as the Golem myth—what is it about the spark of vitality that differentiates our sentience from inanimate matter?—and cross pollinated that unease with the visual grammar that attested to Moore’s Law (the most recent, and still roiling, shock to our collective understanding of matter).

Rather than the exponential ascent plotted in the latter’s chart, the Uncanny Valley is sinusoidal. Its original iteration located a prosthetic hand in the trough and a healthy person at the peak of a trajectory curving away from what has become known as CGI creepiness. Prosthesis and health indicated the poles of animacy against which simulated experiences are screened for verisimilitude. 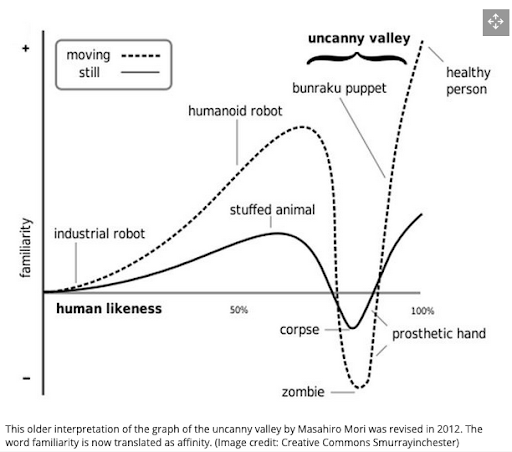 Later iterations on this graph remixed the core idea. Instead of translating the Y Axis’s ‘shinwakan’ as familiarity, the updated translation instead favoured the term ’affinity’. There were now two lines, a dashed line for moving and an unbroken one for stillness. Now opposite the healthy person, on the moving curve, was a zombie. In between—on the stillness curve—was a corpse. A corpse, that final stillness which we all move inexorably towards (albeit at different speeds), may be unnerving, but it is not eerie in the way a zombie is.

Workshop participant Nezka Pfiefer questioned whether the Zombie is that of George Romero fame or whether it tapped into a deeper understanding of zombification, such as its cultural salience in Haitain vodou. The wider zombie context suggested by Nezka, is far beyond the scope of this essay to do more than gloss.][1] That context is relevant because it evokes the loss of autonomy, to whom and through what historically contingent alliance of forces (recall again Zuboff’s three questions). Such a loss may feed into horror but it can also, per a focus on failure of absence, connect to the eerie:

“eerie tales often revolve around the influence of entities or objects that should not possess reflective agency (Fisher, 2016, p65)”

It is this quality which the data double shares with the zombie. The zombie outlives the finitude which we each understand our body as bound to. Zombification describes suspended animation. Denizens of late capitalism inhabit what Lauren Berlant (2010), in her prescient account of the felt conditions of late capitalist precarity, terms “animated suspension”. This is stationary oscillation, a standing wave of sorts that informationalised, financialized, late capitalism modulates each and every one of us through. The ubiquitous computing dream of calm technology foretold that ”lots of computers will share in us” (Weiser & Brown, 1997, p75) and with the correct calibration of centralisation and peripheralisation, encalm us. The installation of ubiquitous computing has been foundational to the infrastructure that creates data doubles of each of us. Modulating the expanse between ”animated suspension“ and completely encalmed is the user experience design problem of surveillance capitalism.

The data double describes that we are apprehended by that which evades our apprehension. The valley of eeriness invites imagining the feedback loops we find ourselves to be in the field of. The data double evades detection because it moves at different scales and speeds than we have been historically accustomed to apprehending. The contours of the Valley of Eeriness are traced by movement and stillness: in between these oscillations and human likeness, affinity is induced and dissipated.

"Negative 'shinwakan”, is when that sense of synchrony falls apart, the moment you discover that the one you thought was your soul mate was nothing more than smoke and mirrors." (MacDorman, 2012)

What is described above is the sudden onset of a feeling of disquiet, of being shaken from one’s encalming. Such disquiet is the domain of eeriness, a sensation that occurs “when there is something present when there should be nothing, or there is nothing present when there should be something (Fisher, 2016)”. Moreover this framing of the valley implies you can descend from the peak of health into the trough of zombification, should the presence of affinity be suddenly withdrawn.

“the computational, database system maintains the multiplicity, the uniqueness of each individual while maintaining them as generic people with multiples of attributes” (Goriunova, 2015, p164)

In order for anything to become computationally queryable it must be normalized to the expectations of the underlying database model wherein it is persisted. Your embodiment must be de-composited in order to persist in a digital system. Databases and other algorithmic technologies instate a “computational maintenance of the operationalized singular and multiple (ibid, p174)”.

Goriunova defines the data multiple and the subject that individuates from it in terms of movement between ”operationalized singularity’ and “multiplicity”. Traces of this subject are located in the generic of contemporary computational culture. In Goriunova’s analysis the notion of the generic “refers to the loss of meaning-making practices orientated towards an end product“, the generic “instead functions as an open-ended computationally-arranged process of drawing upon noise and patterning“[emphasis added] (ibid, p).

“The very absence of a purposive agent provokes a feeling of the eerie (Fisher, 2016)”

Likening raves to political manifestos, Paul Virilio wrote that raves express “the uneasiness of being together of mass individualism” (Virilio, 2012, p59). Databases are a way in which we find our de-composited selves digitally embodied, together yet without corporeal presence: multiple but not a multitude; singular by operationalization rather than individualization. Uneasiness is kindred in sensation to disquiet, an affect of the eerie. The disquiet appropriate to databases may emanate from how they both produce us as the generic and how we drift into, and dissociate from, affinity with this computational genericisation.

The double’s place in cultural criticism is inseparable from the Uncanny and what it unveils about our relationship to otherness. That we are thus far acquiescent to the extension of data surveillance systems to so many domains of our lives suggests the data double does not widely induce sensations of the uncanny. To locate a counterpart sensation by which to recognise and articulate the data double we may return to Mark Fisher, who delineates the eerie from the uncanny.

“Behind all manifestations of the eerie, the central enigma at its core is the problem of agency. The eerie is about the forces that govern our lives and the world (Fisher, 2016, p63)”

In being associated with an omen of death, the double’s uncanny quality assumed an eerie edge. This essay’s proposal is that your data double should be regarded as eerie because it doesn’t end, yet perpetuates pending conclusions of aspects of you—conclusions which may impinge on your agency. The eerie is appropriate to aesthetics of data, databases in particular, but also the aesthetic forms awaiting articulation in the latent spaces of machine learning.

1. David Graeber’s ‘Debt: The First 5000 Years’ has a reading of the tradition from which that zombie may derive, by noting parallels with the horror latent in the Tiv’s tales of flesh debt. He postulates that such lore may be remnants of the collective trauma which the Atlantic slave trade visited on their ancestors: of life taken away (peonage) through the violent imposition of debt. Colonialism is utterly inseparable from Haitan voudon

2. Though Gorionova also qualifies that “The multiple itself, as a dividable, might not be the most useful term here. It is rather a mix-aliquant, data and subject manifold” (Goriunova, 2015, p170)

‘’This text was published in Coded Bodies Publication in 2020’’