Build your own node

In a 2-day workshop we dived into hardware – with guidance of the LoRaWAN expert Frank Beks The Things Network- built and connected a node from scratch within the context of the Internet of Things. During this workshop The Things Network introduced participants to LoRa — a low-power, low-bandwidth network technology, used by TTN for their IoT applications. 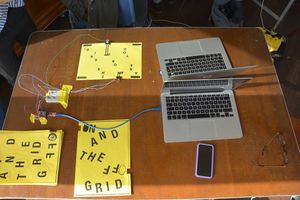 The Things Network is a global community of 15140 people over 84 countries building a global Internet of Things data network. The Things Network is about enabling low power devices to use long range gateways to connect to an open-source, decentralized network to exchange data with applications and platforms. They use a long range and low power radio frequency protocol called LoRaWAN and for short range Bluetooth 4.2. The technology allows for things to talk to the internet without 3G or WiFi. So no WiFi codes and no mobile subscriptions.

A picture sent over LoRa, one pixel at a time. The goal was to show the results on an OLED using the ESP8266. For now it is just uploaded to a webpage. #slowimage #fileexchange #sharing

This project is a model for an elevator, which only operates with voice input. There are no floor numbers, and the elevator decides itself which floor to stop at, according to your pitch. #pitch #sound #nonlinear #voiceinput

Node as a storage device: Using a TTN device to secure a key for double encryption. #encryption #p2p #cryptography

An arduino collects samples of data to assign them to different ranges of frequencies from a sound library. The sound output of a website is manipulated based on the change in air pressure registered by an IoT node. #sound #robot #soundasanoutput